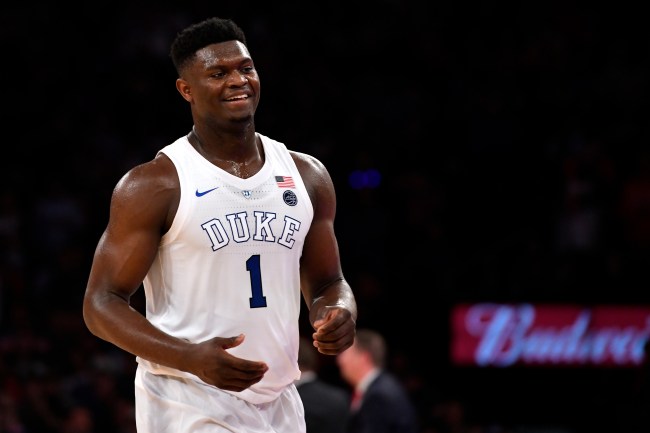 Zion Williamson on the basketball court is the greatest thing since sliced bread; well, in my opinion, anyway. From hitting his head on the F’in backboard when blocking shots to hoops experts truly believing the kid is going to exceed $1 billion in earnings one day because of his skills and personality, everyone who loves basketball is in love with this kid.

Last night, Williamson led his Duke Blue Devils teammates into the world’s most famous arena, Madison Square Garden, where he put on quite the show, dropping 17 points and grabbing 13 boards in his squad’s impressive win over Texas Tech. It was that type of effort that led fans in MSG — plenty of whom are, presumably, New York Knicks fans — to give Zion a bunch of applause and ooh’s and aah’s, hoping that, just maybe, he’ll don a Knicks uniform one day. Problem is, when asked about the possibility of playing for the Knicks, Zion Williamson seemed, uh, less than thrilled.

Take a look at the freshman’s priceless reaction to a reporter asking him about the Knicks. It’s about as disrespectful as one can give, with the kid literally laughing and hiding his face.

Zion Williamson on Knicks: I think this is RJ's team. RJ, u wanna play for the Knicks? If they draft me, I'd love to play for the Knicks. I don't really care where I go. Just the experience of being in the NBA whoever wants me & whoever sees the most in me that's where I wanna be pic.twitter.com/HHYlKLlKK1

Guess we finally found out something Zion’s definitely not good at yet, poker, because he’s terrible at holding in his true feelings. Man, talk about taking a big steamy dump on an entire franchise, huh?

Zion Williamson did recover nicely after his initial reaction, playing the whole PR card after trying to deflect the question to teammate R.J. Barrett. He then raved about the Garden, so maybe, just maybe, he’s giving Knicks fans some reason to believe.

“This is the Garden,” Williamson said. “A lot of greats have come through here… Playing 41 games here wouldn’t be so bad.”

Now, as a Cleveland sports fan, I probably have no room to speak, but, damn, how crappy does it have to feel to be a New York Knicks fan? Every single season, there are teases of LeBron James to Kyrie Irving to Kevin Durant coming to the Big Apple as a free agent, only to get disappointed when they decide the Knicks aren’t for them. Guess Zion Williamson can be added to the “not-too-impressed” list after seeing this. At least in Cleveland we don’t expect superstars to come, but, in New York, it’s supposed to be star-driven.

Who the hell knows where Williamson’s going to end up next year. But something tells me his mood will change once he sees that first multimillion check come in from whatever team’s lucky enough to pluck in the next year’s NBA draft; whether that’s the Knicks or some other lottery team.