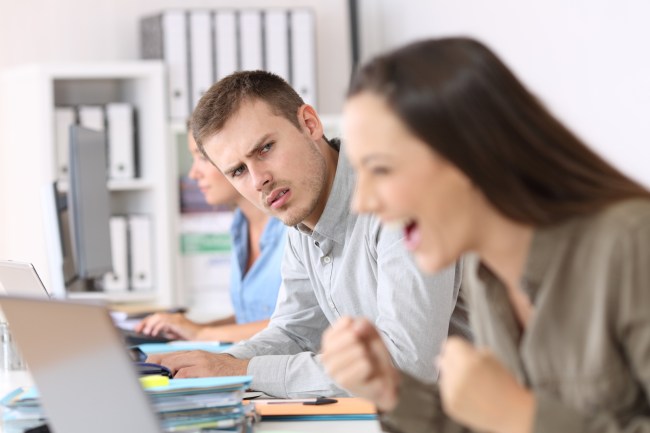 People spend more time in the office than at home, sleeping, or hanging with family.

In fact, people spend so much time in the office that coworkers beging to feel like a spouse. That’s probably why so many people are humping the person in the next cubicle.

For this reason, fellow employees are generally annoying as a parent or sibling and disliked for many of the same reasons like the way they talk or just because of the way he or she dresses for work.

Business Insider raked through a few different Reddit threads to uncover the worst of the worst offenses occuring in cubicle life.

Long story short, some of you people are real assholes. And I should know, I wrote several books on being an asshole.

Here are some of the most offensive habits and quirks.

“Bites his fingernails, then spits the fingernails everywhere. They are all over his desk, stuck to the cube walls, stuck to his chair … everywhere. I’m throwing up right now just thinking about it.”

“I’ve started to get pretty blatant now, turning my back and starting to type an email, etc. but [he] doesn’t seem to get it. One time I started walking down the corridor to the kitchen to end the conversation and he decided to get up and follow me down, continuing to talk all the way!”

“She talks to her computer. There’s no one else in the room but me, so every time she says something I look up. Sometimes she is talking to me, which makes it more confusing. I’ve asked her to stop, but she says she doesn’t think she can. I told her I believe in her, but that hasn’t given her the strength to try.”

“Look, I’m glad you’re a proud father and you wanna raise this kid right. But I do not want to see any more of your 20,000+ photos of your kid, nor do I want to hear about the specific noises he makes when you feed him this food or that food or when you tickle his belly.

“The receptionist will always come into the break room while I’m eating lunch and say “Whatcha doin’? Eatin’?”…….

“Licking the rim of her coffee cup like its a dick. Subconsciously, but ALL the time. It’s so gross, and It makes me cringe.”

“Whenever something starts a topic, she springs into the conversation with her own tale, before the other part has finished talking.”

“I worked with a guy who had no concept of personal space. There were many times where he would creep up into my personal bubble and watch over my shoulder as I’m working at my computer.

He would just barely be far enough away to avoid actual physical contact. I think I got to feel what it is like for women to be creeped on by guys.”

“He continuously clicks his pen. Over and over again. He even does it while talking to someone on the phone. It is so g—— annoying.”

“He comes to work sick. And not like, oh just a little cold sick, no. This jerk showed up with pneumonia. Nobody wants to hear you coughing up a lung and nobody wants to be next in line for your cold. Go home!”

“I hate when people clip their nails at the desk. For some reason, I find it absolutely disgusting.”

Some of these offenses are minor. The nail stuff is grounds for immediate dismissal.