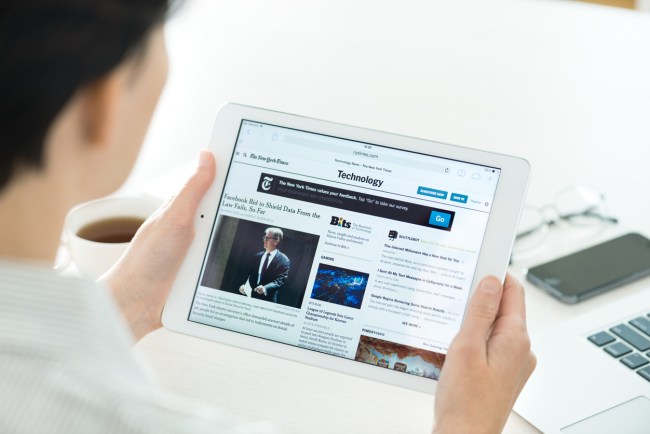 What’s one of the largest companies in the world to do when the going gets tough in the hardware space? Draw up some cockamamie scheme to bamboozle its news partners, of course.

Apple has hinted that it would create a subscription-only tier of its popular Apple News app (because apparently, all the cool kids are doing it) which would allow unfettered access to partner’s paywalled content. And now sources tell the WSJ that Tim Cook plans to sell the services for approximately $10 per month … and keep roughly half of the revenue.

As for the other half? That will be divided amongst publishers based on the amount of time spent viewing their respective content.

Mr. Publisher, tear down that paywall

If you think Timmy iPhones gives even half a f*ck about publications offering their own subscriptions, you’d be dead wrong. In his pursuit of the “Netflix of news,” Cook plans to steamroll the NYT’s $15 per month subscription fee and the WSJ’s $39 monthly price tag.

Unsurprisingly, Apple’s publishing partners are pushing back and have yet to sign on which comes as little surprise considering the outlet’s razor-thin margins.

Help a brother out

Apple sees this as a remedy to more than one of its recent ailments, most notably plummeting iPhone sales which fell 15% last quarter. The company’s growing service segment currently boasts 360M subscriptions across all devices, with aggressive plans to hit 500M by 2020.

Looks like Banco Santander is making bondholders put that theory to the test.

Banco Santander SA decided not to call a $1.7B Additional Tier 1 (AT1) bond, a type of debt which doesn’t actually require the issuer to pay back the bondholders. The bonds will switch from a fixed rate to a lower floating coupon rate of 5.54%.

But what are they?

Additional Tier 1 bonds do not require the issuer to repay the bondholder until it chooses to. Wait, what? Also known as contingent convertible (CoCo) bonds, the instrument became popular after the financial crisis as it allows banks to raise funds without issuing new shares or diluting stock.

Standard practice (and I can’t stress that enough) has thus far been for issuers to repay bondholders at the first call date. Investors take the bait because the instruments pay a higher rate of interest than typical corporate debt and are convertible to equity should the bank’s capital levels fall below a certain threshold.

History in the making

Banco Santander is “making history,” and not necessarily the good kind, as the first issuer of an AT1 bond to not redeem the security, as is customary as a courtesy to the bondholder. This decision may send a ripple effect through the AT1 bond market and future offerings.

Shares of Molson Coors fell 4.98% yesterday despite beating fourth-quarter profit estimates. Why you ask? The brewers missed on Q4 sales expectations and the company also said that it would be restating its financial statements from fiscal 2016 and 2017 after an audit uncovered some f*ck ups.

According to the firm, in 2016 the company misstated it’s tax liabilities and overstated more than $400M in net income. Apparently, the issues were associated with the firm’s partnership with MillerCoors, but investors don’t seem to buy the excuse.

And the company blames the new tax law for an overstatement of tax expenses, and an understatement of deferred tax liability in 2017. Up until now, the two years in question were two of the strongest in the last decade. Go figure.

Not a good look

Molson Coors posted Q4 revenue of $3.02B, leading to a $2.42B adjusted revenue, which fell short of Wall Street’s expectations of $2.54B. The company points to young adults (read: craft beer squids) drinking less of its sh*tty beer. All in all, things could be worse for Molson Coors, whose stock price is up 19% so far this year.