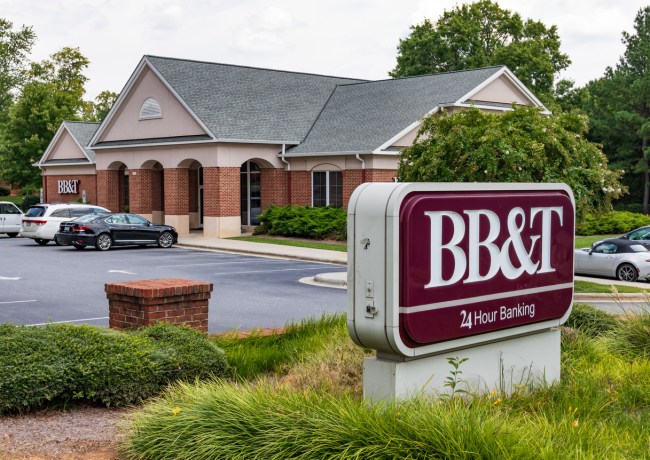 Hickory, NC, USA-15 August 18: A branch of BB&T, a bank holding company based in Winston-Salem, NC.

Bank mergers are back, baby!

BB&T made a deal to buy SunTrust for $28.2B combining two regional lending forces and creating the sixth-largest US retail bank. The deal is the largest merger since JPMorgan bought Bank One Corp. in 2004. The all-stock deal will bring the total market cap of the two entities to $66B.

The new bank has yet to be named, The good news is that ‘Wells Fargo’ is already taken. In what can best be described as a plot twist straight out of reality TV, current BB&T CEO Kelly King will act as CEO until 2021, when he will turn over the job to current SunTrust CEO William Rogers Jr.

Banks in the $10B to $250B range have been beneficiaries of looser policies around bank liquidity requirements under the current administration. BB&T and SunTrust flew under the radar with $225.7B and $215.5B in assets respectively at the end of 2018, thus garnering less regulatory scrutiny.

This could mark the beginning of consolidation in the banking industry as regional players try to compete with the 800-pound gorillas (JP Morgan, BoA, etc.). Lack of resources has resulted in regional banks losing customers to the larger, more sophisticated institutions and their fancy digital offerings.

Services like Goldman’s Marcus are becoming attractive to millennials, and have been driving customers away from mom and pop banks. Regional banks like SunTrust and BB&T, both with roots in the south, should, barring complete incompetence, benefit from shared resources that will allow them to increase their respective digital footprints.

Postmates, the OG of the on-demand food-delivery app space has filed, confidentially, to go public. The company is likely to command a valuation in the ballpark of $1.85B.  “UberEATS for consumers with a conscious” raised $100M in January at a $1.85B valuation.

Fun fact: the gig-economy pioneer began as a way to fill ride-sharing vehicles with things rather than people. But food delivery quickly outpaced flower and furniture deliveries, hence the pivot to meals on wheels.

Like any sought-after, decade-old startup that gets Allbird-donning VCs hot and bothered, the restaurant delivery outsourcer remains unprofitable. Thus the plan to tap the public equity market and its insatiable appetite for the Uber of [insert noun here].

The company operates in some 550 US cities, with a network of 240k couriers whom one can only assume are as comically inept as Rob Schneider in ‘Big Daddy.

Postmates struck strategic deals with Walmart and Apple that gives the courier access to an all you can deliver buffet of consumer goods. Plus, Mates has aligned itself with humans whose laziness and gluttony knows no bounds, those subscribed to Postmates Unlimited $9.99 monthly subscription service.

Self-driving car startup, Aurora, landed more than just a funding round … it scored an endorsement from one of the great business minds (and best dick pic takers) of our time, Jeff Bezos.

The Series B funding round, which was led by Sequoia Capital, injected $530M into the Cruise competitor. Combined with a $90M Series A from Greylock Partners and Index Ventures, Aurora is currently valued at roughly $2.5B.

Amazon, Shell, Sequoia, and T-Rowe Price are the latest companies to invest in the not-quite-decacorn. And it’s easy to see why these companies are investing. Aurora is led by former CTO of self-driving cars at Alphabet, Chris Urmson, and former Tesla and Uber Technologies execs, Sterling Anderson and Drew Bagnell. Can you say ‘pedigree?’

Head on a swivel

This isn’t Amazon’s first rodeo in the space. Not unlike the newly single Jeffrey Commerce sowing his oats, the company is keeping its options open. Besides having an in-house team dedicated to exploring autonomous vehicles, Amazon partnered with Toyota last year to explore the usage of self-driving cars for food delivery and has turned to Embark driverless truck services for hauling cargo.