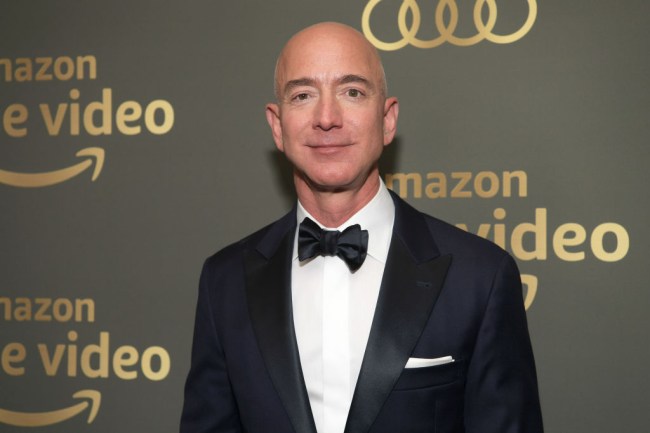 Snapchat … ever heard of it, Jeff? The world’s richest man can put a rocket in space and revolutionize voice recognition, but he can’t master dick pick delivery 101. What a shame.

On Friday The Water Coolest reported (we use that word loosely) on Jeff Bezos’ scathing blog post accusing the National Enquirer of politically motivated blackmail threatening to release nude pics of Bezos and his side-piece-turned-“girlfriend,” Lauren Sanchez.

In addition to the richest motherf*cker on earth threatening to go nuclear on the publication, David Pecker (I sh*t you not) and the Enquirer are facing an investigation of the federal variety.

Why? The zine reached a deal to avoid prosecution in a case that claimed it had assisted Donny Politics in silencing women with whom he had “relations.” As part of the agreement to avoid prosecution, the National Enquirer promised not to do any hoodrat sh*t with their friends (i.e. anything illegal).

Of course, complying with federal law seems like it should be a pretty standard business practice, but alas here we are. Investigators are sniffing around to see if everything seems kosher and if the mag broke any laws.

On second thought, don’t. Despite an “amicable” divorce (which probably just got a whole lot less amicable) which will make MacKenzie Bezos the richest woman in the world and Jeff’s most recent faux pas, analysts don’t believe Amazon’s operations or share price will be negatively impacted.

B*TCH BETTER HAVE MY MONEY

Wells, Wells, Wells, look who’s in the news again. Wells Fargo’s series of unfortunate events continues. This time? A mobile and online banking outage that began on Thursday and spilled into Friday.

The issue arose following a facility shut down on Thursday after smoke (presumably JUUL vape) was noticed during a routine maintenance check. CEO Tim Sloan and Wells Fargo management promised that the event wasn’t a security breach. And who are we not to believe them? They seem like pretty straight shooters who wouldn’t lie to the public.

While Wells reportedly resolved the issue on Friday morning, some mobile and online banking features were still unavailable or delayed. Numerous employees and customers of WF were unable to see their paychecks deposited via direct deposit.

In some half-assed attempt to make things right Wells extended branch hours by one hour on Friday and Saturday and added call center reps to field hostile phone calls.

After years of buzz about where Jeff Bezos and Amazon would land the mothership, not everybody is happy with the results. While the company decided to split its presence between NYC and DC, many residents of Queens are none too pleased.

In DC, legislation for Amazon’s incentive package has already been approved. NYC, however, isn’t planning to approve its deal until next year, giving the e-commerce giant, which hasn’t rented any office space yet, an easy out should they decide to “fuggetaboutit.”

According to reports, Amazon execs aren’t too thrilled with the cold reception, but no official decision to back out of the location has been made … yet. The opposition has come in the form of anti-Amazon rallies and state senators’ petitioning … because nothing stops billionaires dead in their tracks quite like a strongly worded letter.

Not everybody is angry, though. After the NYC location was announced in December, a survey by everyone’s favorite polling university, Quinnipiac, declared that 57% of New Yorkers supported the plan, with only 26% against it. The remaining 17% were likely stuck on a broken down subway train.

Who will have us?

As of now, if the deal were to fall through, Jefferey Commerce and the gang could set their sights on Nashville. Tennessee officials have approved $15.2M in improvement incentives for Amazon to bring 5K jobs, a drop in the bucket compared to the 25K employees set to join the firm in NY.