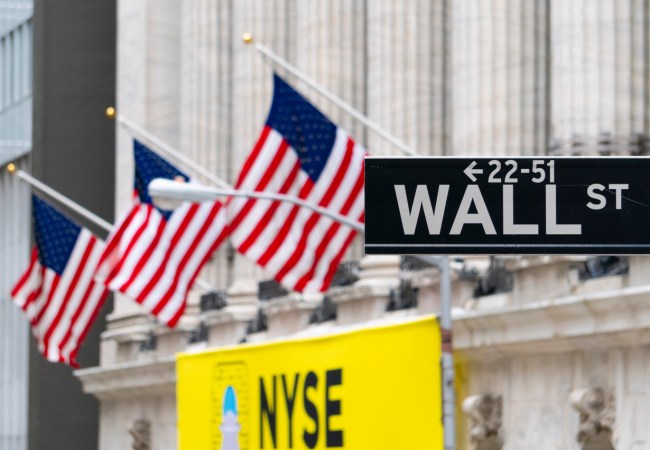 New York, USA - May 14, 2018: Wall Street sign near New York Stock Exchange with flags of the United States. It is the world's most significant financial center.

To say that the current stock exchange landscape in the US isn’t exactly a dog-eat-dog world would be an understatement. Let’s go to the (ticker) tape, shall we? The “big 3” exchanges (ICE aka NYSE, Nasdaq and Cboe) control all but 2.5% of the trading volume in the US which really pisses off a lot of people.

So, as the saying goes, if you can’t beat them, embrace capitalism and undercut the f*ckers on price. That’s exactly what a cartel of big banks, brokerages and high-frequency traders plan to do, announcing plans to create the Members Exchange or MEMX to compete with the power players.

The marketplace has raised $70M to date and put forth a proposal to the SEC for exchange status.

As is commonplace with an oligopo-, er, “tight-knit industry,” complaints have risen about the big 3’s pricing, especially the cost of data feeds. MEMX is planning to go all Scottrade, aiming to win market share with a lower price point.

Other exchanges have attempted to unseat the three amigos to no avail. IEX runs the only “other” exchange in the US … but controls less than 3% of trade volume.

For-profit stock exchanges are a relatively new phenomenon.  From the time that the Buttonwood Agreement (ever heard of it?) was inked around 1792 until the 1990s, exchanges were run mostly as non-profits owned by the brokers who manned them.

Meet the logo formerly known as “Mastercard”. The credit card giant will drop the “Mastercard” moniker from its logo, leaving just the ubiquitous red and yellow overlapping circles to represent the brand.

The wordless Venn diagram will put Mastercard in rarefied company. Only the creme de la creme of blue-chip brands can actually pull off a logo sans words a la Starbucks, Target, and Apple.

And you thought you were indecisive

Of course, the decision didn’t come without overpriced, white glove consultation from the like of Don Draper and 20 months of worldwide research to confirm that 80% of the human race can, in fact, identify the brand by a symbol alone.

Believe it or not, Mastercard didn’t pull the brand marketing equivalent of a WWE finishing move just because it could. The move is two-fold: to distance itself from the word “card” and because size matters.

Mastercard believes the future of payment is cardless and it’s not about to refer to itself a “card” company. Plus, as digital devices eat up a larger market share of our collective screen time, it is becoming increasingly important to be instantly recognizable without all those cumbersome letters.

Japanese conglomerate SoftBank’s Vision Fund is going all “funding unsecured,” announcing that it is reducing planned investment in WeWork from $16B to $2B. A slew of the Vision Fund’s investors voiced opposition to the large deal back in December leaving CEO Masayoshi Son to backpedal.

The main objections came from government-backed funds from Saudi Arabia and Abu Dhabi (who committed $60B combined) who decided that they didn’t like the WeWork investment. The biggest sticking point? The fact that WeWork doesn’t actually make money. Seems valid.

I thought we were cool?

Softbank has made several investments totaling $8B in WeWork through 2018 but the potential plan for the $16B was to buy out other investors and infuse money directly into the operations … aka more artisanal brewery taps. Including the upcoming $2B injection, WeWork is valued at $45B.

The years of the Monkey, Rooster, and Dog were awfully busy for the new Vision Fund which opened for business in 2016. To this point, Masayoshi Son has had almost full reign over Vision Fund investments, oftentimes bucking actual, technical analysis … and free stock signals from an Instragrammer.