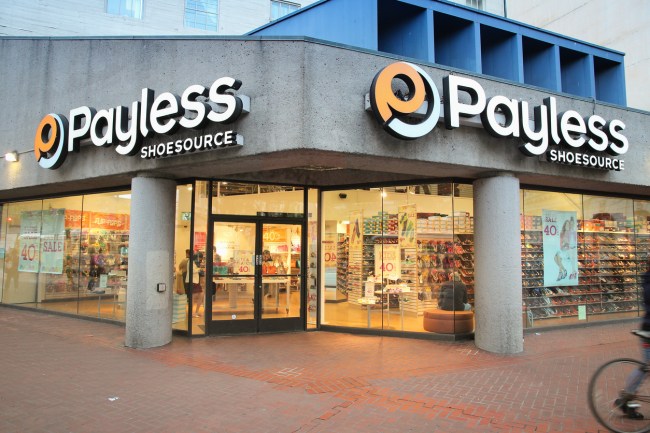 The preferred “ShoeSource” of pre-teen party attendees is going the way of the credit card swipe. For the second time in as many years, Payless ShoeSource will file for bankruptcy in the US.

In 2017 the company shed debt, closed hundreds of stores and made a comeback of sorts. This time it’s different though. Payless will liquidate, closing 2.1k US stores and calling it quits … for good.

Apparently, the appetite for off-brand sweat-shop-manufactured shoes remains strong abroad, however. More than 1.3k international locations, mostly in Latin America and Canada, will remain open. Of course, that doesn’t help the roughly 18k US employees who will lose their jobs.

The good news is that Payless isn’t alone. The bad news is that its a card-carrying member of a club that no company wants to be a part of … the “Chapter 22 club.” The so-called “repeat offenders” club refers to companies that have entered Chapter 11 twice.

Crippled by the likes of Amazon and retail disruption, Payless joins Gymboree, Charlotte Russe and Toys R Us in the retail graveyard.

Uber announced that it lost $1.8B in 2018, a 15% decrease in losses year-over-year, but sales growth slowed significantly in the fourth quarter. Not exactly A-plus material for the roadshow deck in the lead up to one of the most anticipated IPOs of all time.

The fact that Uber loses a Scrooge McDuck-sized vault of money on the reg is no surprise to investors but shrinking sales growth (read: not as many new sales) doesn’t exactly scream “blue chip investment” to someone looking to scoop up the stock in a public offering.

Grower, not a shower

Most investor interest is tied to Uber’s historical breakneck growth. But it hasn’t been all 2-minute waits and “no surge fees” as of late. Following the ouster of founder Travis Kalanick, new CEO Dara Khosrowshahi has been forced to make wholesale changes in search of new sources of revenue. Investments in electronic scooters, freight operations, and other autonomous company’s have all failed to make a dent in Uber’s slowing growth thus far.

Can I catch a break?

The ride-sharing giant isn’t only facing fierce competition in New York City, it’s dealing with Johnny Law too. The Big Apple is limiting the number of Uber, Lyft and other ride-sharing drivers it allows on the road at any one time citing congestion issues.

Uber has filed a lawsuit against the city claiming that it doesn’t have the evidence to prove that Uber drivers are causing the congestion and that the cap prevents employees from reaching minimum pay requirements. Lyft and Juno have also filed lawsuits against the city.

Rivian released its first two electric truck models just three months ago, but they’ve already got Jeff Bezos’ attention. The company, founded in Florida as Mainstream Motors in 2009, announced that it has closed a $700M funding round led by Amazon.

Rivian’s R1T truck and R1S SUV models made waves at the LA Autoshow back in November, and the company has begun taking preorders for its vehicles scheduled to be released in 2020. Both models will start between $61,500 and $65,000, after the $7,500 IRS tax credit.

And Amazon isn’t the only company looking to gang up on Elon Musk. Last week news broke that GM was also kicking the tires on a potential investment in the Tesla killer.

What’s in it for Amazon?

Amazon’s investment gives the firm a foothold in the auto industry and helps the Seattle-based bookseller reach its disruption quota. It’s likely that Amazon is interested in key EV technologies that could be applied to its own logistics services, like delivery vans.