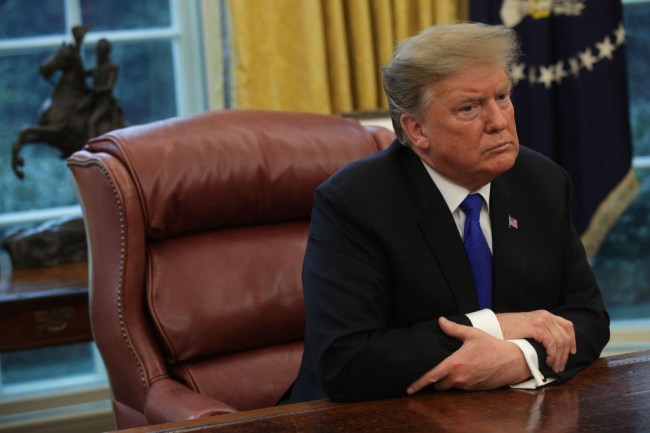 Donald Trump has gone all ‘Zack Morris’ on additional tariffs on Chinese goods slated to begin on March 1st. Via an announcement on Twitter, to no one’s surprise, Donnie reported that substantial progress had been made with China regarding “intellectual property protection, technology transfer, agriculture, services, currency, and many other issues.”

The trade talks were initially supposed to end on Friday, but like any good bender continued well into the weekend as momentum continued to trend positively. Negotiators have warned that it’s still early for celebration, as a deal has yet to be finalized, but as of now, it appears markets have been justified in their premature celebration of a deal.

According to Secretary Mnuchin during the latest round of talks, a currency provision was agreed upon that would stabilize the value of the yuan. And DJT confirmed that he will be hosting Chinese President Xi Jinping later in March to discuss steps to move forward at his Mar-a-Lago golf club.

Are the current tariffs working?

The hold on additional tariffs is good news for US businesses. Currently, the 10% tariff rate on Chinese goods is costing American businesses and consumers upwards of $2B per month.

Twitter’s co-founder and former CEO, Ev Williams is stepping down from the company’s board. The tech luminary, presumably named after the preferred bourbon of SEC tailgates, founded the social media giant alongside Biz Stone and Jack Dorsey, the company’s current chief executive.

Ev relinquished his day to day responsibilities in 2010 and founded Medium in 2012. Medium is a longer-form online publishing platform that has struggled to gain the momentum of its 140-character counterpart. For what it’s worth, it was Jeff Bezos’ platform of choice for delivering the blog heard round the world. Did we mention he owns the Washington Post?

Why is he leaving?

Nobody really knows. His Twitter announcement didn’t offer much in the way of rationale. But rest assured, “he is excited about new opportunities.” Super original, Ev. Of course, that doesn’t mean we can’t make wild speculations …

Last year Williams was critical of social media for its ability to “dumb the entire world down,” even going as far as to apologize for Twitter’s role in allowing for the Trump presidency. So there’s that …

The state of the union

Ev leaves the board at a time when social media sites are facing headwinds in the form of hate speech, harassment, fake accounts etc. And with only 321M monthly active users and mounting costs, Twitter is struggling to keep its shareholders happy.

As if trade wars with China weren’t enough, the EU has indicated to the US that it won’t just idly by if Donny Politics decides to tax European cars coming into the US.

POTUS has suggested (read: threatened) as much as 25% tariffs on foreign-made vehicles. Nothing is official … yet, and the EU wants to keep it that way. The 28-nation bloc plans to retaliate with a $22B tax of its own on US goods across the Atlantic should the US pull the trigger.

The targets of the EU retaliatory tariffs include Caterpillar, Xerox, and Samsonite, because apparently, Europeans have a bone to pick with excavators, copy machines and luggage. Caterpillar did roughly 22% of its revenue abroad and is already feeling the pain from the trade war with China, so the EU might be onto something here. But the announcement didn’t exactly spook markets … Cat and Xerox were little changed on Friday.