The Fed Goes Nuclear On The Financial System 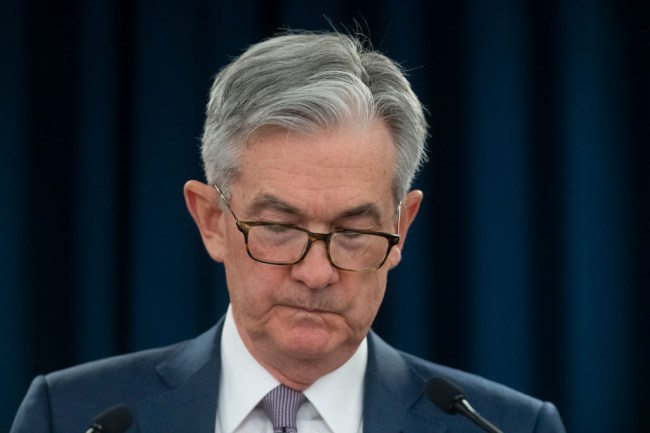 The following is one story you’ll find in today’s edition of The Water Coolest’s free daily email newsletter. The Water Coolest is a daily business news and professional advice email newsletter geared towards bros (read: expect a hearty helping of unfiltered commentary and advice on how to suck less at work). You can sign up now to get the latest news and commentary delivered to your inbox every weekday at 6 AM EST.

The Fed had itself a Sunday Funday, gathering ahead of its planned meeting this week and handing down an emergency action plan. The most notable, er, interesting, move was the immediate cut of interest rates to near zero percent. Rates were slashed a full percentage point, to a range between zero and 0.25%.

Jay Powell and his squad also announced that they will buy $500B in Treasury Securities and $200B in mortgage-backed securities (read: quantitative easing). The Fed also projected that the economy will likely shrink in Q2, because it turns out that bars, cruises, sporting events, and conferences closing down is “bad for the economy”, and not just your weekend plans.

If at first, you don’t succeed…

This is the first time in its history (since ‘94) that the Fed has cut interest rates on two occasions in between scheduled meetings. It didn’t help settle markets on March 3rd, and judging by pre-market trading, history appears set to repeat itself. Maybe the third time would be a charm?

As for what will happen today, stock futures indicate that we might (read: will be) be in for another volatile day of trading. The S&P 500’s 5% (pre-market) slide triggered its limit down emergency shutoff. What panic?

This circuit breaker prevents traders from further pushing down the futures’ prices, but still allows trades at prices higher than that 5% drop. Dow Jones futures dropped more than 1k points, also triggering a down level limit… because misery loves company.

From a broader economic perspective, it remains to be seen if the financial markets will remain calm… or if all hell will break loose. Jerry Interest Rates’ goal is to take a page out of his predecessor’s (Ben Bernanke) book and ensure liquidity for businesses and consumers during this sh*tshow.

JP and his boys dropped the nuke this weekend. While nine of the members agreed, one member did vote for a range of 0.5% to 0.75%, presumably to potentially allow the Fed to make an additional action before getting to negative rates.

The Fed still has some potential tricks up its sleeve, including a facility to finance short term commercial debt. Last used during the financial crisis, this would potentially result in a decrease of companies attempting to draw on their bank lines of credit, thus keeping more cash at banks.

The near-zero interest rates should ideally encourage lending from banks to businesses, and encourage consumers to invest their excess cash in the market instead of storing it away under their mattress or in a bank account.