It Took 8 Grown Ass Men To Wrassle This 21-Foot, 132-Pound Snake Into Submission 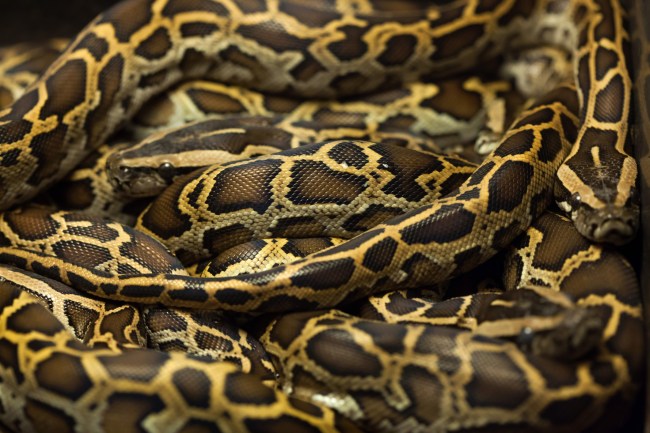 Human beings are born with an innate (healthy) fear of snakes. 99.999% of human beings approach snakes with extreme caution because it’s a creature that generally doesn’t bring much joy into our lives compared to a puppy or a frolicking deer.

Typically, we see snakes and we go running in the other direction. But then you have the herpetologists who see snakes and go running for them. There are also people like the snake wranglers here in Florida who get paid to remove nuisance pythons from The Florida Everglades and then there are the first responders and pest removers who are called to get rid of individual nuisance snakes.

Typically, it takes one person to remove a snake. Not this time.

This Burmese Python in Taiwan was too much for any one man to handle. In fact, it took EIGHT FIREFIGHTERS called into action to wrangle this snake into submission.

The Taiwanese Kaohsiung Fire Bureau was alerted to a massive snake in a ditch in the Chengcing Lake in Kaohsiung City’s Niaosong District. There is NO POSSIBLE WAY they could’ve anticipated just how large this snake was.

When it was all said and done, eight adults were needed to subdue the snake that measured 21-feet-long and weighed 132+ pounds (60 kilograms). The Burmese Python is the longest snake species in the world which is just one reason that Floridians like myself are spooked about these invasive snakes spreading like wildfire in the Florida Everglades. I mean, just look at this damn thing and tell me you’re cool with living anywhere near this:

Taiwannews.com reports that locals were losing their shit over this snake:

Once the python was at the station, the firefighters decided to have a bit of fun and pose with the snake for a Tetris Challenge photo, which has been all the rage online lately. The photo then quickly spread through a number of police and firefighter social media groups.

Many Taiwanese netizens were terrified by python’s massive size:
“I’m scared to death! It’s too big.”
“The snake in the video looks like it wants to bite people.”
“Mowing the grass and running into a python.”
“It’s only this big because Ah Ma raised it.”
“I’m very curious to see what they plan on doing with that python next.”

What they did next was pose for those photographs and have some fun with it, keeping it at the fire station while authorities decide to do with this literal dragon-sized snake.

When I was looking for images of this snake on Instagram I came across this DISTURBING photo from Florida’s Fish and Wildlife Conservation Commission that they uploaded a few minutes ago:

There are plenty of photographs of this 21-foot Burmese Python over on For The Win if you want to check out some closeups on what this snake looks like.