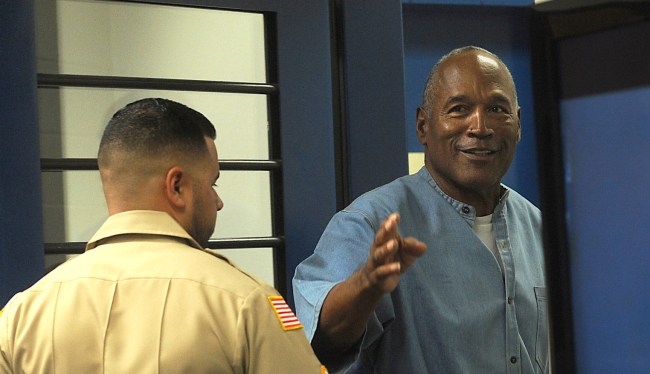 Back in 1995, after being acquitted of the murders of his ex-wife Nicole Brown Simpson and her friend Ronald Goldman, O.J. Simpson said in a statement, “My first obligation is to my young children, who will be raised the way that Nicole and I had always planned. … But when things have settled a bit, I will pursue as my primary goal in life the killer or killers who slaughtered Nicole and Mr. Goldman. They are out there somewhere. Whatever it takes to identify them and bring them in, I will provide somehow.”

25 years, almost to the day, after Nicole and Ron were murdered – June 12, 1994 – O.J. Simpson was interviewed by Linda Deutsch of The Associated Press and informed her that he will “never revisit” the subject of the infamous double murder.

So much for his “primary goal in life,” huh?

“Life is fine,” Simpson recently told The Associated Press in a telephone interview from his home.

He added that neither he nor his children want to talk about June 12, 1994, the night his ex-wife Nicole Brown Simpson and her friend Ronald Goldman were stabbed to death. Simpson was ultimately acquitted of the crime in what came to be known as “The Trial of the Century.”

“We don’t need to go back and relive the worst day of our lives,” he said as Wednesday’s anniversary of the killings approached. “The subject of the moment is the subject I will never revisit again. My family and I have moved on to what we call the ‘no negative zone.’ We focus on the positives.”

Officially, the murder case is listed as “unsolved.” However, a civil jury stated in 1997 that it was, in fact, solved, awarding the victims’ families $33.5 million after finding Simpson guilty. 22 years later, most of that money still remains unpaid.

Related: Former Manager Says He Can Prove O.J. Simpson ‘Had At Least One Accomplice’ In The Infamous Murders

Simpson currently lives in Las Vegas, the same place where he was arrested in 2007 for robbery and kidnapping and sentenced to nine years in prison.

As for why he still remains in Sin City, Simpson said, “The town has been good to me. Everybody I meet seems to be apologizing for what happened to me here.”

The podcast will feature interviews her brother’s friends, the detective who investigated the murders, for defense and prosecution attorneys, plus two of the 12 jurors who found Simpson not guilty back in 1995.