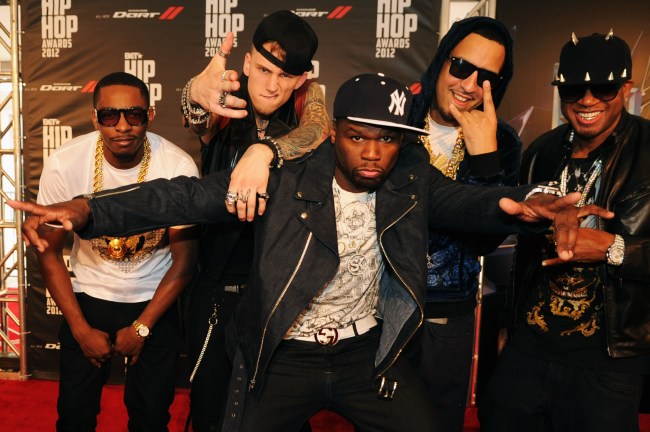 French Montana and 50 Cent are engaged in some rap beef, and the rappers are exchanging insults on Instagram. The hip-hop feud centers around an “old” $1.8 million Bugatti that was allegedly purchased on a 60-month loan. The rap battle has escalated after French Montana shared a photo purportedly showing 50 Cent and Eminem kissing.

50 Cent and French Montana have had bad blood for years. Going back to 2012, French Montana gave an interview to Complex, where he made disparaging remarks about 50 Cent. French Montana, real name Karim Kharbouch, signed onto Rick Ross’s Maybach Music label in 2012 after being on Diddy’s Bad Boy Records. Montana attacked 50 Cent’s ability to sell records.

“Yeah. You can’t beef with people because it’ll scare money away. In the streets, you can strong-arm people and take money, but you can’t do that in the industry,” Montana said. “I feel like beef hurt him. I feel like it helped Ross unite people.”

“That’s why Maybach Music is one of the biggest labels. It just makes sense. Of course, Ross is on his fifth album. And like I said, he’s only getting bigger. This is going to be Ross’ first platinum album,” French Montana said. “He never went platinum. So when 50 came up, 50 sold 10 million. Then after his first album, he just kept on going down. You think 50 could come out and sell 10 million now?”

50 Cent responded to the article by asking French Montana if he was high during the interview. He called out French Montana on Twitter in a series of tweets that said he “hadn’t sold one record” and “never had a song by” himself.

Im not tweeting about this little fool No more.I'm a see him and he gonna explain that's it.

Do you realize this fool @Frenchmontana hasn't sold one record and talking about sales.

RELATED: Yelawolf Invited Eminem To Do A Collabo With Machine Gun Kelly But A Diss Track War Happened Instead

French your Sh!t so weak you never had a song by your self fool. Ain't nobody's waiting to hear your verse. Girl

French Montana you ain't Sh!t boy. You out your league talking about me you hoe.i read your little interview what the fucx is you high.

In 2015, the two rappers got into a fight about vodka. Fiddy represents Effen Vodka, while Montana supports the alcohol of his former boss, Diddy’s Ciroc vodka. A seemingly plastered Montana is seen with a bottle of Effen and threatens to throw the vodka in a studio. Eventually, he drops the bottle into a trash can.

50 Cent posted a clip of Montana saying that he “loves Effen vodka” despite it being “kinda watered down.” But in fact, Effen Vodka is 40% ABV (80 proof), which is the standard for vodka.

French Montana is down with us it's the unit. 😆#EFFENVODKA #FRIGO #SMSAUDIO puffy tried to set him up,where his check at? The real money puff we street not stupid. 😳

Fast forward to this week, the rap beef was reignited when 50 Cent roasted Writing on the Wall rapper over his new automobile. On Monday, French Montana shared an Instagram video of him getting a new Bugatti after getting out of the hospital. French Montana claimed that he was the first rapper in New York with a 2020 Bugatti Veyron.

50 Cent wasn’t about to let French Montana enjoy his new car and popped on Instagram to rain on his parade. Fif, who owns a 2020 Bugatti Chiron, said French Montana’s “new” car is actually a used model. “That’s a 2010 Veyron man, you shoulda just got the Uber app on ya phone ‍♂️it’s 2020 Chiron Man hahaha Put that bullsh*t back on that truck,” Fiddy said.

The G-Unit rapper said the vehicle is so old that it doesn’t have a navigation system or a USB port, and it still uses CDs. Is having a car with a compact disc player not considered cool? My 1994 Geo Metro has a 6-disc player in the trunk.

Then 50 Cent claimed that French Montana took out a 60-month loan because he couldn’t afford it with cash. I wish I was a rapper who was getting roasted for getting an old Bugatti.

French Montana responded with his own Instagram post with a sales listing for a 2010 Bugatti Veyron 16.4 Grand Sport with 6,061 miles that has a price tag of $1,899,960. Montana wrote: “CONGRATS TO ME 59 lol ….. IS THIS SUPPOSED TO BE FUNNY ??!! LOL U REALLY MAD IM WAVIER THAN YOU … YOU UNWAVY CREATURE GET YOUR INFO RIGHT SHOW THE PAPER WORK DINOSAUR …YOU DO IN EVERY OTHER CASE YOU RODENT YOU DONT EVEN OWN ONE …. FRONTIN LIKE YOU GOT ONE U FUNNY 59 !! YOU GOT A LAWSUIT WITH MANHATTAN MOTORS FOR RETURNING ALL THEM CARS YOU TOLD THEM YOU WAS BUYING AND THAT’S BIG FACTS.”

French Montana retaliated by sharing an old unverified photo that allegedly shows 50 Cent and Eminem kissing and the caption: “BACK TO BACK AGAINNNNN WHOS THAT 59 COULDNT EVEN GET A BUGGATTI AFTER THAT DINOSAUR look at my dawg Kay slay face lol.”

Fans are claiming that the photo is doctored, and it originally had singer Nicole Scherzinger in the pic.

Something tells me that 50 Cent isn’t going to let this pic slide and let the rap beef die.