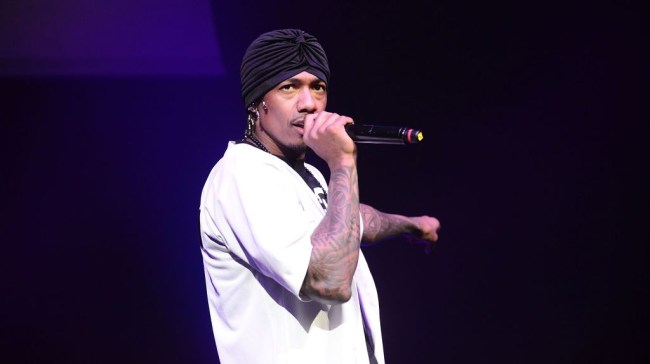 Nick Cannon desperately wants to get Eminem’s attention, but the problem is that Marshall Mathers isn’t taking the bait, but this new song may catch Marshall’s attention. Nick Cannon released a new diss track titled Canceled: Invitation on Thursday afternoon, which samples an old Eminem song that has racists lyrics. The diss track is the Wild’ N Out host’s third joint aimed at Shady in their recent rap beef.

Nick Cannon is savvy enough of a businessman to use Eminem’s star power to draw attention to his MTV sketch comedy show. Nick Cannon extended an invitation to Marshall Mathers to appear on Wild’ N Out. Eminem never responded to Cannon’s Invitation diss track.

Cannon said on Twitter that Eminem’s invitation had expired, and the three diss tracks were part of his “trilogy.”

Welp! The Invitation has expired…

Trilogies are my favorite!

In Cannon’s third and latest Eminem diss track titled Canceled: Invitation, Nick samples an old Eminem song that Mathers is not proud of. The new diss track features a sample of the song Foolish Pride, a joint that Em made in 1998 when he was 15-years-old.

Cannon used the sample because Foolish Pride has some racist lyrics, ones that Mathers has since apologized for.

“Blacks and whites they sometimes mix/But black girls only want your money ’cause they’re dumb chicks/Don’t date a black girl/If you do it once you won’t do it twice/Black girls are dumb, and white girls are good chicks.”

After The Source magazine dug up the song, Marshall Mathers apologized for the racial lyrics.

“Ray Benzino, Dave Mays, and The Source have had a vendetta against me, Shady Records and our artists for a long time,” Eminem said in a statement.

“The tape they played today was something I made out of anger, stupidity, and frustration when I was a teenager,” Mathers said in November of 2003. “I’d just broken up with my girlfriend, who was African-American, and I reacted like the angry, stupid kid I was. I hope people will take it for the foolishness that it was, not for what somebody is trying to make it into today.”

By shining a new light on these controversial lyrics, Cannon’s new diss track may twist Em’s hand and force him to respond.

Nick Cannon Fires Back At Eminem, Calls Him ‘Grandpa’ And An Erectile Dysfunction Pill