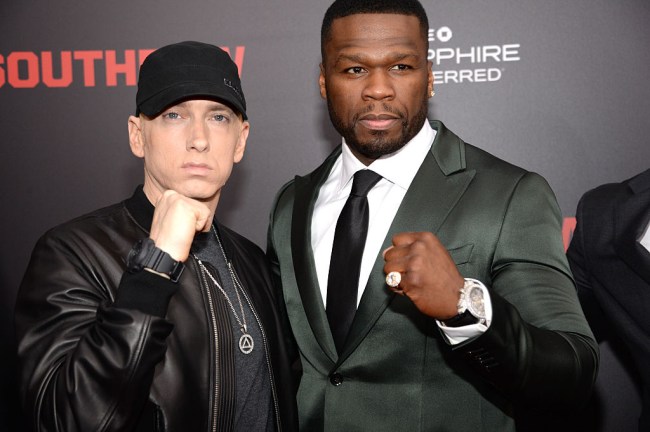 It all started when Eminem took some shots at Nick on the Lord Above track on Fat Joe’s new album Family Ties. Cannon fired back by calling Eminem “grandpa.” Marshall Mathers clapped back on Twitter by questioning Cannon’s sexuality, which caused #RIPNickCannon to trend on Twitter. Nick declared himself the winner of the feud between him and Em.

Suge Knight and his son quickly jumped in on the Eminem-Cannon squabble as Nick released his diss track The Invitation. Now, 50 Cent has jumped into the pettifog.

“I don’t understand to save my life why someone would pick a fight with EM,” 50 Cent wrote on Instagram. “He is a different kinda animal, I haven’t seen a motherf*cker come close to beating him man. 😠hey Nick that shit was trash, I oughta kick you in yo ass when I see you PUNK!”

Cannon at-mentioned Fiddy on Instagram in a post that had a photo of Samuel L Jackson’s slave character Stephen from the movie Django Unchained.

“Nick like so that’s it, nobody cares about my dis record. No Nobody cares LOL,” Fiddy joked as he posted a photo of Nick Cannon wearing a bikini top.

Cannon responded by keeping with his theme that Eminem is 50 Cent’s slavemaster, all while trying to promote his show Wild ‘N Out.

“@50Cent since Massa is incapacitated we cordially invite you to come to the show @mtvwildnout and get his smoke!! LOL,” Nick replied to the G-Unit rapper.

The Def Jam Records founder and 50 Cent allege that Oprah is purposely “going after Black men” for allegations when there are plenty of white men to condemn. “I don’t understand why Oprah is going after black men. No Harvey Weinstein, No Epstein, just Michael Jackson and Russell Simmons.”

“I just want to know why she is only going after her own. When it’s clear the penalties have been far more extreme for African American men,” 50 wrote.

In another Instagram post, Fiddy asked: “You think Oprah don’t notice how this sh*t is playing out?”

Simmons spoke out about the upcoming documentary, while also do some promotion for his book.

“Dearest OPRAH, you have been a shining light to my family and my community. Contributing so much to my life that I couldn’t list a fraction of it in this blog. I have given you the gift of meditation and the groundbreaking book THE POWER OF NOW we bonded to say the least. This is why it’s so troubling that you choose me to single out in your recent documentary,” Simmons posted on Instagram along with the photo of him doing an interview with Oprah.

Winfrey’s “Me Too” documentary is focused on the music industry and will be available on Apple TV+.