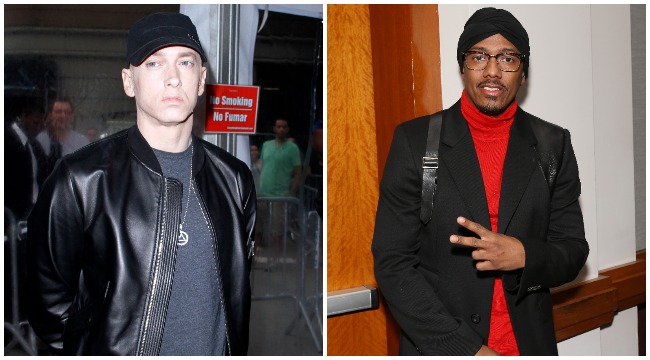 Mariah Carey revealed in July that she’s a “prude” who has only slapped skins with five guys in her entire life. These numbers aren’t entirely accurate seeing as she conveniently left out how many times her and I have made sweet, tender love in my head.

In any event, this data suggests that Mariah is sexual napalm, as 40 percent of her partners are still saltier than an Auntie Annie’s pretzel with how things transpired nearly a decade later.

Another chapter has been added to the Nick Cannon vs. Eminem saga, which was birthed in 2009 from Em’s sixth studio album, Relapse, in which he raps: “Nick Cannon, you prick, I wish you luck with the fuckin’ wh*re/Every minute there’s a sucker born, snuck up on Malachi/Made the motherfucker suck on a shuck of corn.”

Fat Joe’s new Family Ties album features a new track  with Eminem called “Lord Above” in which the 47-year-old rap icon resurrects his beef with Cannon in response to Cannon saying that he was prepared to “whoop [Eminem’s] ass” for speaking “out of pocket” about his wife all those years ago.

Em’s verse in “Lord Above“:

“I know me and Mariah didn’t end on a high note/But that other dude’s whipped, that p*ssy got him neutered/Tried to tell him this chick’s a nut job before he got his jewels clipped,” he spits.  “Almost got my caboose kicked, fool, quit, you not gon’ do shit / I let her chop my balls off, too ’fore I lost to you, Nick.”

Cannon playfully mocked the verse on his Power 107 FM show.

Cannon then gave Fat Joe props for his album while taking a shot at Eminem’s age.

He then released a song called “The Invitation” featuring Suge Knight (from a jail cell) where he accused Eminem of doing crack and on the verge of relapse.

He also criticizes Em as a father, saying:  “Call Kim, somebody get Hailey and that other kid you raising that ain’t even your baby.”

About holding onto a lost love: “My baby mama killed you off a decade ago/You still crying about it bitch, now who really the hoe?”

A oral sex! “I heard your chauffeur got a video of you sucking a c*ck/ You paid him off then laid him off, now who really the opps.”

Eminem, who rarely tweets, caught wind of the verse and fired off some more shots on Twitter in response to Cannon’s diss.

Can you imagine if someone dropped a verified video of Eminem giving a beamer in the back of a car? I’m not sure the internet is ready for that kind of power.