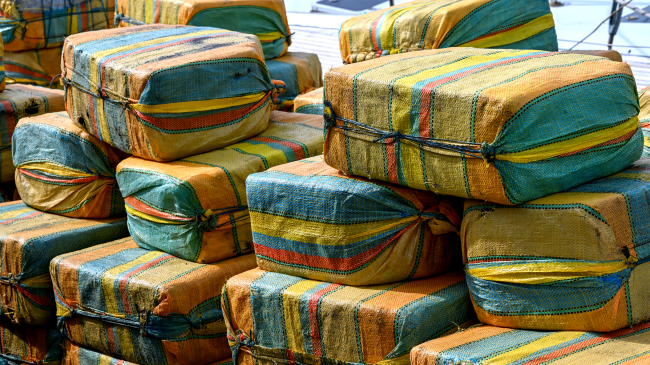 Nearly six tons of cocaine with a street value estimated at approximately $232 million was seized by Portuguese and Spanish authorities from a 79 foot yacht in the Atlantic Ocean on Sunday.

Luis Neves, director of Portugal’s criminal investigation police, said it was the largest amount of cocaine ever seized from a sailboat as such large quantities of cocaine are usually found on cargo ships and other large motorized boats.

It is also the the biggest drug seizure in Portugal in the last 15 years and one of the largest ever in Europe.

Related: US Customs Agents Seize A Whopping $75 Million Worth Of Cocaine From A Semi-Submersible Vessel

“The Judiciary Police, through the National Unit for Combating Narcotics Traffic, in a joint operation with the Unidad de Drogas y Crimen Organizado of the Cuerpo Nacional de Policía of Spain and with the participation of the Navy and Air Force, developed, in recent days, a complex operation in the course of which it was possible to locate and then intercept, in the middle of the Atlantic Ocean, a 24 meter long sailboat that was being used to transport a large quantity of cocaine,” read a statement by the Portuguese Judiciary Police.

“Three men were arrested, all foreigners, who are strongly suspected of being part of a powerful transnational criminal organization dedicated to the trafficking of large quantities of cocaine between Latin America and the European Continent, who will be presented to the competent judicial authority for the first judicial interrogation of detained defendant and enforcement of coercive measures.”

“We are always expecting (more drug trafficking) and this is the message we want to send organisations: we are waiting for you,” said Neves. “Those who have to fall will fall because this amount of drugs is an immense fortune and a huge blow for criminal groups.”