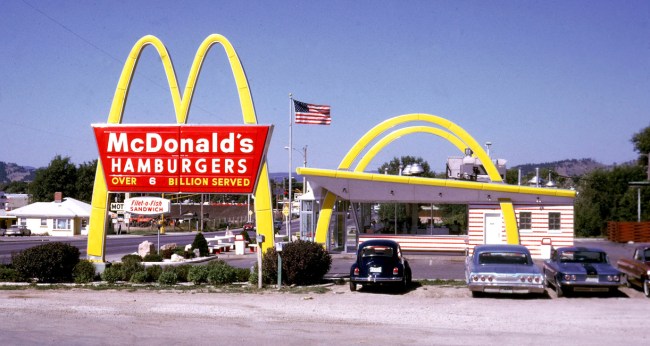 Ar least once a year it seems like someone stumbles across or shares photos of some decades old food from McDonald’s.

The year 2022 is proving no different, as a guy who was recently renovating his bathroom found a 60 year-old bag of McDonald’s food hidden in one the walls.

Why this only happens with McDonald’s food is a bit perplexing. You never hear about a 25 year-old bag of Burger King Whoppers being found or saved, but that’s a mystery for another day.

The guy, Rob from Illinois, found the ancient McDonald’s bag “wrapped up in an old rag” with some french fries still in their box, looking as crispy as ever.

He said in a Reddit post that “it was stuck in the original plaster behind and old toilet paper holder.”

Rob also commented that he lives “close to one of the original locations in Crystal Lake, Illinois” that opened in way back in 1959.

“Our house was built in 1959 and pretty sure these have been there since. Still perfectly crispy,” he added.

Related: Utah Man Has A 20-Year-Old McDonald’s Hamburger He Bought For $.79 And It Disturbingly Looks Brand New

“It was wrapped up in an old rag and I was glad to see it was only French fries,” Rob commented. “I was nervous I was about to help solve a cold case.”

“As a former construction worker you’d be surprised how many chip bags, Gatorade bottles, coke bottles, fast food cups are inside a lot of the newer houses,” wrote commenter, with several others saying similar things.

Many commenters on Reddit offered Rob suggestions for what to do with his piece of McDonald’s history.

“Some private collector or museum will definitely pay a good price for this,” one person wrote.

“Sell them to pay for the renovation,” another commented.

“What kind of monster doesn’t finish their fries?” another asked, while several others dared Rob to eat the fossilized fries he found.

Related: Lady Shows Off A 24-Year-Old McDonald’s Meal That Disgustingly Looks The Exact Same As It Did When She First Bought It

Speaking to Newsweek about his unusual find, Rob said, “We are currently renovating our kitchen and bathroom. While removing a fixture in the bathroom I noticed a piece of cloth stuck behind plaster and pulled it out to show my wife. It was balled up and we could tell there was something else inside. When we unwrapped it and found the old McDonald’s bag and fries we were very surprised and grateful that is all we found hidden.”

“You, sir, are officially an archaeologist,” someone told him on Reddit.