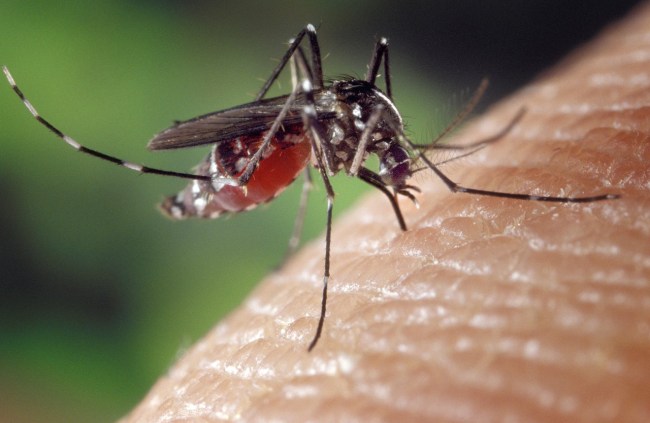 I live in Florida and can personally vouch for the fact that we have too many mosquitoes already. They’re around all year long but from the months of March through October I can’t step outside at night without hearing that high-pitched buzz go screaming past my ear as I fruitlessly swat them away knowing there are a thousand more mosquitoes where that one came from.

We have too many. And Florida’s plan is to reduce the number of mosquitoes we have but releasing 750 MILLION more mosquitoes into the wild over the next two years. Specifically, they want to drastically reduce the numbers of Aedes aegypti mosquitoes because those are the ones responsible for carrying life-threatening diseases like Zika, Dengue, Yellow Fever, and others.

Again, the plan is to reduce the number of mosquitoes by introducing 750 million new mosquitoes into the wild. There’s absolutely no way this can backfire. None at all. Nope.

Some locals are calling this a ‘Jurassic Park Experiment’ which when you take a step back and think about what’s happening it isn’t all that different from what Hammond attempted to do at Jurassic Park by ‘playing god’ with new life. Let me pump the brakes here and admit that I’m actually in favor of this. If it means we have significantly less disease-carrying mosquitoes and carve a path to doing this all across the tropics then this will be remarkable for global health. I’m just concerned about the numbers we’re seeing here, 750 MILLION MOSQUITOES!!!

If you’re wondering how this will work, it’s pretty ingenious. The genetically engineered mosquito named ‘OX5034’ has been altered so the female offspring die off quickly in the larvae stage. The female mosquitoes are the ones that bite for blood which are needed to grow the mosquito eggs. No females, no blood, no growth, no next generation of these mosquitoes. So by introducing them to mate with the Aedes aegypti they lead to the eradication of that mosquito species by cutting it off at the offspring.

According to CNN, a trial run in Brazil reduced the number of Aedes aegypti mosquitoes by 95% so this has the potential to be incredibly successful in the Florida Keys where these 750 million will be released in 2021 and 2022.

Some are voicing their concern:

“With all the urgent crises facing our nation and the State of Florida — the Covid-19 pandemic, racial injustice, climate change — the administration has used tax dollars and government resources for a Jurassic Park experiment,” said Jaydee Hanson, policy director for the International Center for Technology Assessment and Center for Food Safety, in a statement released Wednesday.

“Now the Monroe County Mosquito Control District has given the final permission needed. What could possibly go wrong? We don’t know, because EPA unlawfully refused to seriously analyze environmental risks, now without further review of the risks, the experiment can proceed,” she added.

Approved by the Environment Protection Agency in May, the pilot project is designed to test if a genetically modified mosquito is a viable alternative to spraying insecticides to control the Aedes aegypti. It’s a species of mosquito that carries several deadly diseases, such as Zika, dengue, chikungunya and yellow fever. (via CNN)

A lot of residents in The Florida Keys don’t love their homes being used as a testing ground for these mosquitoes while others are fully in support of this initiative. It’s an extremely divisive issue down there where a lot of the local population is made up of field biologists and scientists, a much higher proportion than in the general public.

For more on this, you can click here to read the full article over on CNN.com.