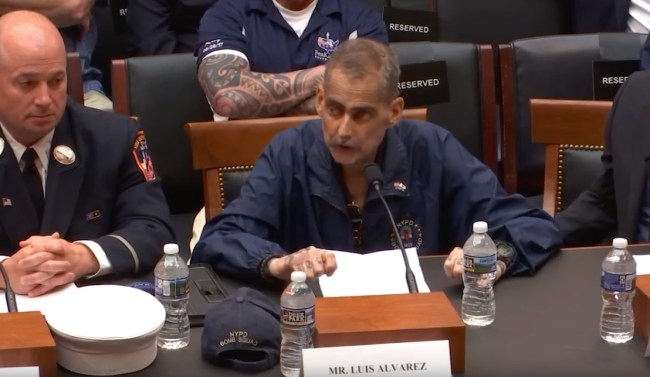 Retired Detective Luis Alvarez, who was committed to spreading awareness about the plights of fellow 9/11 first responders, has died. The NYPD veteran died on Saturday after battling cancer for several years following his courageous and unselfish acts on September 11th. Lou Alvarez was only 53-years-old when he died in a hospice in New York.

The Alvarez family issued a statement on Lou’s passing that said: “It is with peace and comfort, that the Alvarez family announce that Luis (Lou) Alvarez, our warrior, has gone home to our Good Lord in heaven today.”

“Please remember his words, ‘Please take care of yourselves and each other.’ We told him at the end that he had won this battle by the many lives he had touched by sharing his three year battle,” the statement on Facebook said. “He was at peace with that, surrounded by family. Thank you for giving us this time we have had with him, it was a blessing!”

Earlier this month, despite having only weeks to live, a frail Alvarez went to Washington D.C. to testify in a House Judiciary subcommittee hearing for an extension of the fund for police officers, firefighters and other emergency workers who became sick after working at Ground Zero.

On June 11, Luis Alvarez spoke in front of the House committee along with Jon Stewart in an effort to expand the September 11th Victim Compensation Fund.

“You made me come here the day before my 69th round of chemo,” Alvarez told Congress. “I’m going to make sure that you never forget to take care of the 9/11 responders.”

“We were there with one mission, and we left after completing that mission,” he said. “I have been to many places in this world and done many things, but I can tell you that I did not want to be anywhere else but Ground Zero when I was there.”

“Now that the 9/11 illnesses have taken many of us, we are all worried about our children and spouses and our families if we are not here,” Alvarez pleaded as he rallied to get an extension for the 9/11 Victims Compensation Fund (VCF), which is running out of money because so many first responders have gotten sick.

“I will not stand by and watch as my friends with cancer from 9/11 like me are valued less than anyone else because of when they get sick,” Alvarez said. The brave New York Police Department veteran received a standing ovation for his testimony.

The death of the retired NYPD bomb squad detective is linked to complications of cancer linked to his selfless act of helping others and searching for survivors in the rubble of the World Trade Center at Ground Zero following the terror attacks on 9/11.

On June 20, only days after giving emotional testimony before Congress, Alvarez announced that he needed to be admitted to a hospice because doctors could no longer treat his cancer.

“I’m now in hospice, because (there) is nothing else the doctors can do to fight the cancer,” Alvarez wrote in a Facebook post the following week.

Alvarez’s liver had completely shut down because of his tumors.

“So now I’m resting and I’m at peace. I will continue to fight until the Good Lord decides it’s time,” Lou wrote. “I will try to do a few more interviews to keep a light on our fight for the VCF benefits we all justly deserve. Please take care of yourselves and each other.”

The day after Alvarez and Stewart spoke, the House Judiciary Committee voted unanimously to reauthorize the fund.

Many paid their respects to the fallen hero.

A hero among heros. Please keep Detective Lou Alvarez, stricken with 9/11-related cancer, in your thoughts and prayers as he enters hospice care. In his words, “Still here, still breathing, still fighting.” pic.twitter.com/ZYiJobbU6d

He exemplified the NYPD motto, “Fidelis Ad Mortem” or “Faithful Unto Death.” Detective Lou Alvarez has lost his battle with 9/11-related cancer. An inspiration, a warrior, a friend—we will carry his sword. https://t.co/utRphj7owx

We lost another 9/11 first responder. Our thoughts are with the family and friends of NYPD Detective Luis Alvarez. pic.twitter.com/rnbhYuFNGJ

Our hearts are broken after the passing of a real hero, Det. Luis Alvarez of the bomb squad. He gave everything to help rebuild this city after 9/11, and made it his life’s work at the end to #Renew911VCF permanently. He defined courage and honor. May he RIP #FidelisAdMortem pic.twitter.com/lv6QSJipqw

Retired Det. Lou Alvarez was a great cop — fearless & committed. Until his last breath, Lou fought for his fellow 9/11 responders, calling on law makers to do what’s right. He showed the world what it means to #NeverForget & that will forever be his courageous legacy. R.I.P. pic.twitter.com/MwBzIcB81H

To our hero, retired Detective Luis Alvarez, thank you for all you have done for us. You are an inspiration to all and we will continue to keep you and your family in our prayers. Let’s show Lou our support because “in this family, no one fights alone!” pic.twitter.com/JLZfONmxSi

It is with a heavy heart that we mourn the loss of Dt. Louis Alvarez of the bomb squad, a true hero. Dt. Alvarez fought for others while fighting for his life and continued that fight until the very end. .

Retired NYPD Det. Luis Alvarez, 53, an American hero suffering from 9/11-related cancer, is now in hospice care. “You all said you would never forget,” he told an MIA Congress last week. “It is my goal & it is my legacy to see that you do the right thing.” https://t.co/B25mtZ8hYL pic.twitter.com/RMPm6uhIHC

A sad day for The Inspection Service and the entire law-enforcement community as one of our brothers in blue today lost his battle with cancer. May you R.I.P. Detective Luis Alvarez and know that your brethren will continue fighting for all 911 First Responders. pic.twitter.com/3SElwVeB0s

RIP Lou Alvarez, 9/11 first responder & advocate who fought for his fellow brothers & sisters & all Americans every day of his life until the very end. He cherished his country & his family & will be dearly missed. pic.twitter.com/MbjPwrb4jT

Thoughts and prayers with family and friends of 9/11 hero NYPD Det. Luis Alvarez. Lou was a fighter to the end. A great American. I was actually scheduled to visit him in hospice tomorrow. Lou Alvarez personified America’s heart and soul. Luis Alvarez R.I.P.

Today, we mourn the loss of Luis Alvarez, a champion for the health of 9/11 first responders, and one of the selfless men and women who searched for survivors at Ground Zero.

We must build a society where we take care of each other and treat heath care as a human right. https://t.co/lB1bBgzaGh

NYPD Detective Lou Alvarez died at peace knowing his life made a difference to others and will save lives in the future.

He was a great man. My prayers go to his family, the NYPD, and all who loved him. https://t.co/anHtQyzt4A

Det. Alvarez lost his fight against cancer, but his fight for 9/11 responders and survivors continues. He dedicated his life to protecting others and advocating on behalf of those ailing after the attacks. It is time for Congress to honor his sacrifice. https://t.co/tDXkzfCBRD

Retired NYPD Detective Lou Alvarez fought for what was right until his last breath. He never wavered in his service to others — at Ground Zero and after he was diagnosed with 9/11 related cancer. Lou was the epitome of the NYPD’s motto, Fidelis Ad Mortem. We will #NeverForget. pic.twitter.com/TZzTqasvHj

Detective Luis Alvarez…A true “American Hero”; thank you for your service to our country and our city. May you rest in peace. pic.twitter.com/1COdO0PBEV