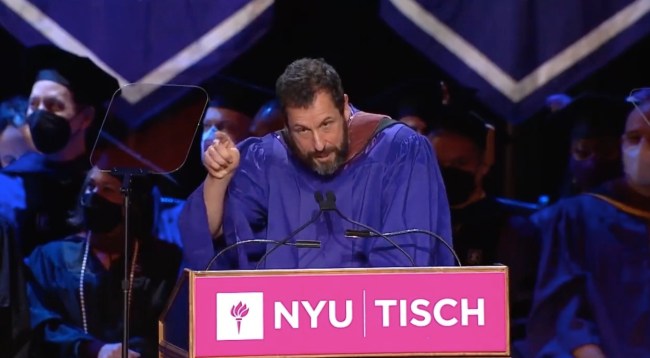 Growing up in the 90s and early 2000s, you were either an Adam Sandler kid or a Jim Carrey kid. With Carrey churning out the likes of The Mask, Ace Ventura, and Dumb and Dumber, and Sandler starring in comedy classics such as Happy Gilmore, Billy Madison, Big Daddy, the pair defined comedy in the 1990s, particularly when it came to the big screen.

In the decades since, though, while Carrey’s star has faded, Sandler’s has remained ever-present and he’s has spent the last 20 years racking up hundreds of millions of dollars, signing lucrative deals with Netflix that have ballooned his estimated net worth to just shy of $500 million.

And yet, despite his astounding popularity and subsequent success, Sandler remains as down-to-earth and relatable as ever, as evidenced by his famously relaxed wardrobe and this recent commencement speech he gave for NYU’s Tisch School of the Arts graduating class, which highlighted virtually all of the trademark Adam Sandler quirks we’ve come to know and love over the last 30 years.

Congrats to all grads pic.twitter.com/8o9nucQ6VI

The 55-year-old Sandler remains as busy as ever this year, as he’s currently scheduled to star in three films, all of which are Netflix movies.

The first, Hustle — which was co-produced by Sandler and LeBron James — will premiere on the streamer on June 8. Sandler is also set to star in the sci-fi drama Spaceman alongside Carey Mulligan and Paul Dano, and in the comedy The Out-Laws with Pierce Brosnan, Ellen Barkin, Nina Dobrev, and Michael Rooker.

RELATED: Adam Sandler Shares He’s Really Into Golf Now And Why He Can’t Play Like A Regular Person