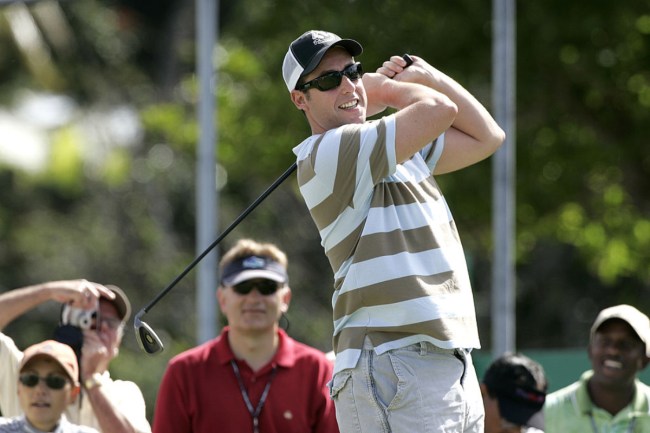 Not only is Sandler an uber-popular movie star, but he also starred in one of the greatest golf movies of all time that features one of the most iconic golf swings of all time. This has created a problem for Sandler every time he tees it up.

Sandler recently joined Dan Patrick on ‘The Dan Patrick Show‘ and explained that it’s a guarantee that when he steps on the tee, people always beg him to do the ‘Happy Gilmore’ swing.

“I’m into golf now, but when I go, I have like maybe five good holes in a row. Then it goes bad, then it comes back,” Sandler explained.

Patrick then asked Sandler if people expect him to do the ‘Happy Gilmore’ swing, which Sandler explained that they absolutely do.

“I have to, I get called out, if I go to a new place it’s a guarantee on the opening tee. I mean, people come forward, they’re looking and I’m like ‘I’ve gotta do this.’ I do the Gilmore swing and then move on.”

It was probably pretty cool the first few times people asked Gilmore to do the swing, but ‘Happy Gilmore’ was released in 1996. Being asked to do the move for over 25 years has probably gotten pretty old by now.

However, it’s safe to say that Sandler has gotten the ‘Happy Gilmore’ swing down after all these years doing it for people.