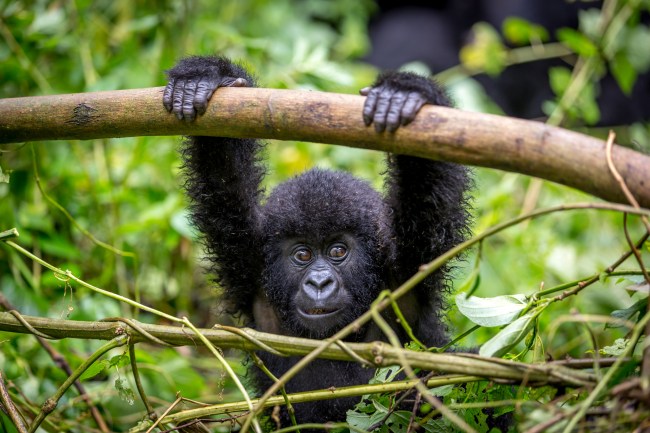 Not the gorillas. Please. If it takes a complete global lockdown, where every person on the planet outside of essential services is forced to shelter in place, then I’m 100% cool with that if it means we don’t wipe out the endangered gorilla population.

There are roughly 1,000 gorillas living in the wild across Congo, Uganda, and Rwanda. According to scientists, the health and safety of those wild endangered mountain gorillas are very much at risk due to the COVID-19 pandemic. I didn’t know this until today but gorillas are apparently very susceptible to some common respiratory illnesses that affect humans.

The common cold can a mountain gorilla and this is one of the primary reasons that tourists are forbidden from getting closer than 7-meters to a wild mountain gorilla. One of the scariest problems with the novel coronavirus is it can be spread by someone who is asymptomatic for days/weeks. A person can pass it around without knowing their sick and this means they could, in theory, be visiting the wild gorilla habitat and spreading the virus around without having a clue as to what they’re doing.

And as for that 7-meter rule, that tourists are supposed to stay that far away from gorillas at all times when visiting the wild habitat, they say the rule was broken close to 100% of the time:

That’s why protective measures are being taken to try and ensure the survival of the endangered wild mountain gorillas. But will it be enough to ensure the safety of this species?

Congo’s Virunga National Park, home to about a third of the world’s mountain gorillas, is barring visitors until June 1, citing “advice from scientific experts indicating that primates, including mountain gorillas, are likely susceptible to complications arising from the COVID-19 virus.”

Neighboring Rwanda also is temporarily shutting down tourism and research activities in three national parks that are home to primates such as gorillas and chimpanzees.

Mountain gorillas are prone to some respiratory illnesses that afflict humans. A common cold can kill a gorilla, according to the World Wide Fund for Nature, one reason why tourists tracking gorillas are not normally permitted to get too close. (via)

Based on the report in the NYPost, it seems like they’re taking this as seriously as possible. While Uganda hasn’t shutdown gorilla tourism yet they are taking extreme precautions. Visitors coming from countries where the novel coronavirus is present are going through a quarantine process upon arrival in Uganda and once they’re released they are giving a certificate of quarantine. They will then need to present this quarantine certificate in order to be allowed into the park to track the endangered wild gorillas.

One reason they’re keeping the park open to tourists in Uganda is because they receive around $600 per permit with thousands and thousands paying up each year to see the gorillas. In Rwanda, that permit can cost $1,000. This is a much-needed revenue stream to keep the staff paid, the same staff who is out there protecting the gorillas from poaching.

“I think this is going to have a huge impact on their sustainability,” Kahumbu, the Kenyan conservationist, said of Virunga. “I call on all donors and governments that support these national parks in Africa to make it easy for the parks that need to shut down to do so and survive.”

Poachers could do even more damage to gorillas if they think the anti-poaching efforts have been reduced, she said. (via)

I find it strange that I’m sitting here, locked inside for the umpteenth day, worried about these wild gorillas on the other side of the planet, in a country I’ve never been to, protected by people I’ve never met, when there is very clearly trouble all around but that’s just where I’m at right now.

If you’re interested in what can be done to help, you can click here to visit the Virunga National Park website to learn about conservation and donation efforts.