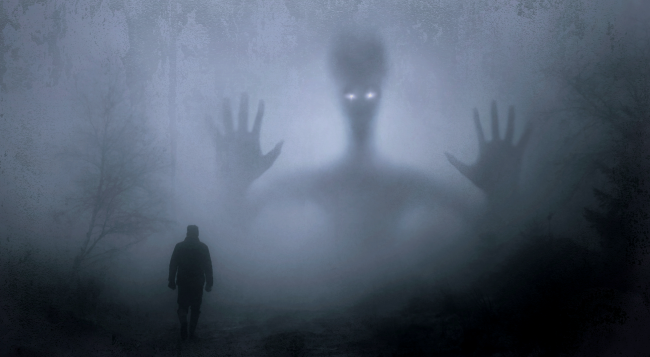 Former US Air Force nuclear weapons technician Adrian Reister says that from 2003 to 2007 while he was stationed at Whiteman Air Force Base in Missouri, he not only encountered multiple UFOs, he also came face to face with what he describes as a “shadow person.”

Whiteman Air Force base also just so happens to be the home of the 509th Bomber Wing which recovered the alleged crashed alien craft at Roswell.

The 37-year-old’s duties at Whiteman Air Force Base involved providing security, as well as maintaining and moving nuclear weapons.

On at least two occasions, Reister says he had encounters with a UFO that looked like a glowing orb. He maintains that it couldn’t have been one of their planes because it didn’t look or move like any he had ever seen.

Speaking to Liberation Times about his experiences, Reister explained, “Naturally during this time I am being hyper-vigilant, and I notice a light or orb hovering along the top of the tree line, I’d thought it was just a star at the time but as I continued surveilling the area, the light/orb shot above the treetops and hung there for some time, maybe it was a satellite I thought.

“As the transport team arrived and secured the weapon within the facility, the orb bounced a little in the sky then shot to the left (north) then shot 90 degrees straight up and disappeared.”

Reister also witnessed saw another orb above the base while working sentry duty.

“All of the orbs or sky phenomena that I personally saw were the same single glowing orb, yellowish-white tint to it,” he said.

In the summer of 2006, Reister says he was working in the base’s support section between 11 p.m. and 7 a.m. when he heard footsteps caused by what sounded like bare feet.

“The sound went away as I looked up and scanned the room. Not seeing anything I just shrugged my shoulders and went back to work,” Reister revealed.

“Within a few more minutes I heard barefoot walking again, away from the support area, and this time I got up to look around.

“I saw what I can’t really describe as other than a black mass in the shape of a person standing at 6ft, not really a shadow but something that was slightly blurry and didn’t reflect any light… it quickly turned the corner into the admin area of the shop, and I chased after it like a madman.

“As I ran down the length of the wall from the support section and into the admin area I searched high and low, there’s not really a lot of places to hide in that section, just a few offices and a break room. I’d been thorough in my search but I still ended up empty-handed.”

He still can’t explain how this “shadow person” got into, or out of, the base as it had not entered through the front security doors and all the other doors were secured at the time and had security seals, none of which had been broken. (See a sketch Reister drew of the “shadow person” here.)

Reister says none of these incidents were reported “because if you did, you might be considered mentally unstable and have your clearance and PRP status (personal reliability program) revoked.”

“Whether it’s a person, a wolf, a rat or a rabbit – no one besides authorized personnel should be anywhere near a base which stores nuclear weapons – the culture must change – if the USAF took a comprehensive approach, it would notice a pattern of similar occurrences at other bases, which should make senior officials take note,” he said.