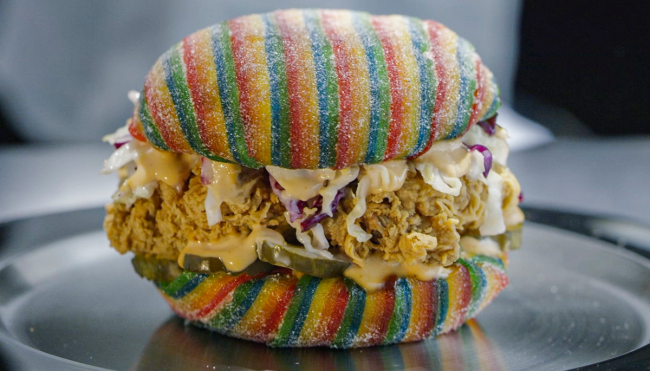 It’s been almost two years since Popeye’s fired the first shot in a war that continues to rage when it unleashed its chicken sandwich on an unsuspecting world that was plunged into chaos due to the hype surrounding the fast food item that led to an armed mob storming one of the chain’s locations in search of the sought-after delicacy.

Since then, virtually every other major player in the fast food game has attempted to get in on the action in some shape or form. Most restaurants have taken a fairly traditional route, but others have attempted to stand out from the pack by introducing their own twist. That includes Taco Bell and its Tex-Mex inspired creation as well as KFC, which replaced the bun with a couple of donuts.

Now, a new challenger has entered the arena with a sugary variation of its own in the form of…Airheads? Yes, those Airheads.

On Tuesday, the candy company revealed it was celebrating National Fried Chicken Day with the reveal of the “Candy Chicken Sandy,” which features fried chicken, coleslaw, spicy mayo, pickles all sandwiched between a bun made entirely out of Airheads Xtremes.

The sandwich was only dished out at a single location in Chicago on Tuesday afternoon, so while I didn’t have a chance to try it, I did have a few questions that a representative for Airheads was kind enough to (sort of) answer.

I’ll just start off by asking the question I think everyone will have when they see the news: “But why?”

The Airheads brand is about play, and we thought it was time to play in the chicken wars.
How long did it take to develop? Who was the brain trust behind it?
An undertaking like this takes lots and lots of hard work. From concept to the first candy sandy took at least 45 minutes.
How is the bun constructed? Any plans to sell them so people can make their own?
The bun is made up of delicious sweet and sour Airheads Xtremes Belts that are fused and latticed together. No plans to sell this special Airheads bun, but people are welcome to use their own stash of Airheads candy to create their own chicken sandy.

What can people expect when they take a bite?
Imagine eating Airheads Xtremes and a fried chicken sandwich at the same time.
As someone who’s covered countless shameless PR stunts over the years, I’d like to extend my congratulation to Airheads for getting exactly what they wanted. Well played.