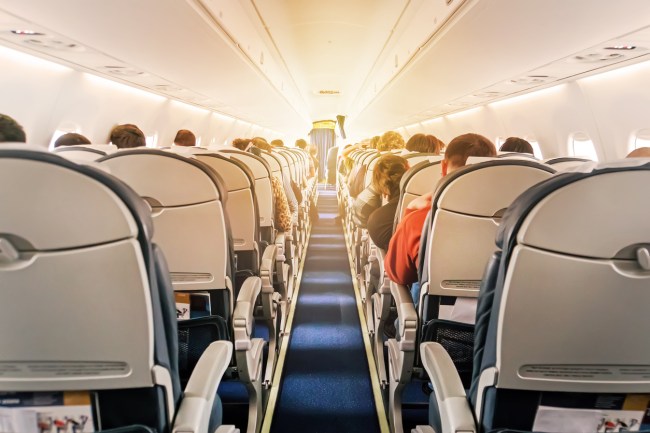 Commercial aircraft cabin with rows of seats down the aisle. morning light in the salon of the airliner. economy class

Airlines weighing passengers before flights could soon be a reality, according to a new report. The new initiative sounds like an episode of Curb Your Enthusiasm.

Airline companies may start requesting the weight of a sample of air travel passengers before they board the commercial airplanes, according to a report by airline industry publication AirInsightGroup. The reason is that Americans continue to be heftier.

Why Are Airlines Asking The Weights Of Passengers?

Citing an overlooked advisory by the Department of Transportation and the Federal Aviation Administration (FAA) from May 2019, airlines could request the weight of some passengers at the airport gate. Female passengers are never going to go for this.

“U.S. airlines may need to start weighing passengers in order to comply with FAA rules,” aviation blog View from the Wing reports. “For safety reasons, carriers need to calculate an aircraft’s weight and balance, and it has to be within allowable limits for the plane.”

The blog notes that “Americans are getting fatter.” The AirInsightGroup adds, “Thirty percent of adults 20 years of age and older (over 60 million people) are obese, according to the National Center for Health Statistics.”

“An operator that chooses to weigh passengers as part of a survey should take care to protect the privacy of passengers,” the FAA guidance adds. “The scale readout should remain hidden from public view. An operator should ensure that any passenger weight data collected remains confidential.”

“The new FAA standards will increase an average adult passenger and carry-on bag weight to 190 pounds in the summer and 195 pounds in the winter,” the report says. “Up 12% from 170 pounds and 175 pounds, respectively.”

The entire FAA situation is a real-life version of Episode 4 of Season 10 of Curb Your Enthusiasm. In the hilarious episode titled “You’re Not Going to Get Me to Say Anything Bad About Mickey,” Larry David rents a private jet to take his friends to a wedding in Cabo San Lucas, Mexico. The pilot AKA “captain” asks for the weight of each passenger, which presents a major problem for Larry David. Leon, Jeff, Susie, Cheryl, and Larry’s new girlfriend put up a fuss in providing their weight. This conundrum leads Larry to enlist the services of a Mexican carnival worker who guesses the weight of people.