Alex Morgan And Megan Rapinoe Hit Back At The Haters And Losers, Of Which There Are Many 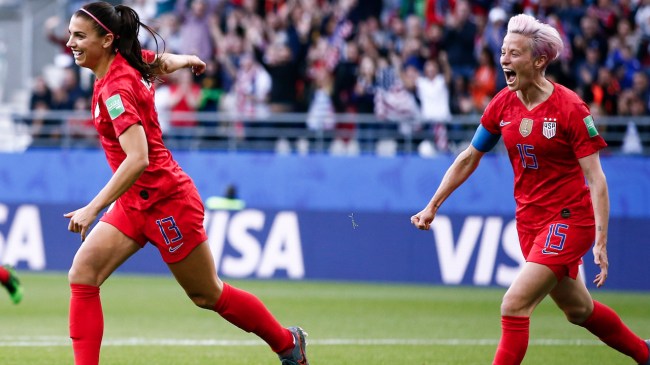 Stop me if you’ve heard this one before: the rest of the world is angry at the United States of America.

Now, while Planet Earth being annoyed with Americans may not be a novel phenomenon, what is entirely new *this time* is the reason for the widespread disapproval: because one of our soccer teams scored a shit ton of goals in a single game.

In case you haven’t heard by now, the lovely ladies of the United States Women’s National Team opened up their 2019 World Cup campaign in style by absolutely thrashing Thailand by a score of 13-0 in their opening game.

It goes without saying that you don’t need to be an armchair Alexi Lalas to understand that 13-0 is an utterly insane scoreline.

Naturally, there are quite a lot of people who are upset with the USWNT for not only piling on the goals but for celebrating each one like it was their first.

While the argument is certainly nuanced (Should they have stopped scoring? Would that have been more disrespectful? Should they have just stopped celebrating?), the fact remains that we’re ultimately bloviating about a sport, which, at the end of the day … is just a game.

Like, yeah, the USWNT probably went a little OD with their celebrations once they had gotten past the 7 goal mark, but we’re talking about professional soccer players playing at the tournament of a lifetime. We don’t shame boxers for knocking out their opponent in the first round of a 15-round right, do we?

And that seems to be the stance that USWNT stars Alex Morgan and Megan Rapinoe are taking, as they have been totally unapologetic when asked about the gaudy scoreline in postgame interviews.

Morgan, who scored five goals by herself, said she felt it would be disrespectful if the team didn’t “show up and give our best.”

Alex Morgan of #USA comments on the Americans receiving scrutiny for continuing to celebrate goals scored against #THA at the #FIFAWWC pic.twitter.com/KOAiJaBbHi

Similarly, Rapinoe — who chipped in a 79th-minute goal herself — echoed Morgan’s sentiment, saying that “if our crime is joy, then we’ll take that.”

"I think our only crime was an explosion of joy last night." @mPinoe responds to the world's reaction to the @USWNT's 13-0 win pic.twitter.com/y9MMIVg6vh

Regardless of how you feel about the actual scoreline, if you’re a true fan of the sport, then any headlines and public discourse surrounding the game should be considered a positive. Growth is growth, and a scoreline like a 13-0 will only push the Thailands of the world to improve their women’s soccer programs.