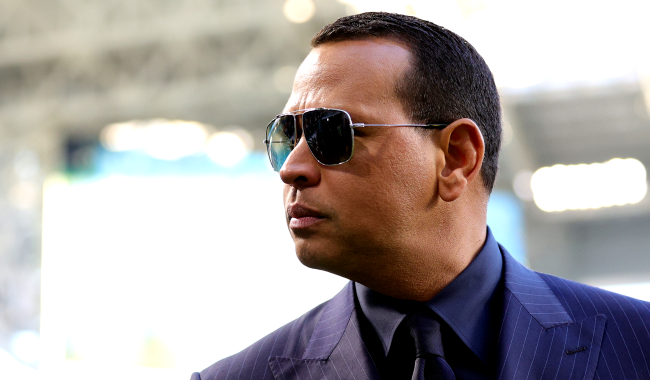 Last time we checked in on a heartbroken Alex Rodriguez, he was sending flirty DMs on Instagram to married Australian television host Belinda Russell.

Before that he was on Instagram setting extra places at the dinner table, presumably for his long lost live Jennifer Lopez and her kids.

This past weekend, however, Alex Rodriguez took a whole new approach on social media by sharing an Instagram story Friday night that featured the former Yankees slugger cuddling up next to a young blonde who referred to him as “the big boss.” Whatever that means.

Radar (and Jose Canseco) previously reported that Alex Rodriguez’s team has been scrambling to find him a “younger” rebound woman to replace JLo. Could this be her?

So yeah, he probably wrote that because no one says “din din” except for him.

On Sunday, A-Rod posted another Instagram story in which he says he is “about to step into a new beginning in my life. Anything that doesn’t serve me is clearly out of my life.”

Hint, hint… Alex Rodriguez is talking to you, Ms. JLo. Very subtle, by the way.

“New energy is emerging,” he added, channeling his best Kyrie Irving, “New levels are unlocking for me mentally, physically, and spiritually.”

Rodriguez finished by saying, “I am remaining patient and know that this new phase of my life is coming.” Again, whatever that means.

Meanwhile, as that and A-Rod’s launching his own line of men’s makeup was going on, Jennfier Lopez and Ben Affleck were together down in Miami. Affleck was even seen wearing the exact same watch he wore during the “Bennifer” era of our lives, so you know it’s love.

She too “is doing well” and is reportedly “very happy and excited about her future.”

Good for all of them.