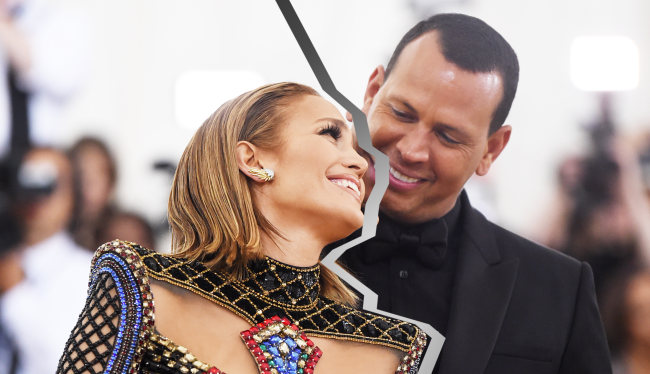 Alex Rodriguez is still down bad, apparently. Just when we thought he had reached peak pathetic with regard to his breakup with Jennifer Lopez, he goes and ratchets it up a notch.

“Din din with my girls! #DaddyDinnerDate 💜💚,” he captioned the photo with his 13- and 16-year-old daughters Natasha and Ella.

Related: Jennifer Lopez Reportedly Broke Up With A-Rod, Who’s Still Posting Pics Of Her, Because She Was ‘Miserable’

Another thing about the photo that caught people’s eye as being odd was the fact that he set three extra place settings. Are those for Lopez and her kids, Max and Emme?

“This makes me sad. The 3 empty plates..JLO, max and Emme 😢,” wrote one commenter.

“They look sad! They miss the little ones 🥺,” commented another fan.

“😢Makes me sad were the other plate settings for jlo n the coconuts,” said another.

Missing from this setting: Copious pitchers of water to address A-Rod's thirst!

I love how he put a place setting for JLo if she comes back.

Of course, A-Rod being A-Rod, i.e. a little strange, he could always have extra place settings put on the table just because he thinks it looks nicer or something. Who knows with him?

Surely, the timing of this lovely family photo – right around the same time it was officially announced that he was buying the Minnesota Timberwolves (a reported deal breaker with JLo) – was just a coincidence. No way Rodriguez would be trying to be manipulative or anything using his kids and social media.

Too cynical? Are you familiar with Alex Rodriguez?

Congratulations to my good friend Alex Rodriguez on becoming an NBA owner by purchasing the Minnesota Timberwolves! @AROD

“There has been a few angry emails and text’s, but Jen and Alex haven’t spoken in a week or so,” sources have told Radar.

“He is angry and embarrassed at how fast Jen has moved on. Despite telling him that nothing happened with Ben while Jen was still engaged to him, something is fishy.”

Lopez has also already staked her claim to the gym the two of them used to work out at together.

EXCLUSIVE DETAILS: #JLo is clearly not interested in trying to avoid her ex-fiancé, #ARod.https://t.co/EGx7fht3kP

Looks like he’s going to have to find a new place to keep that dad bod fit.