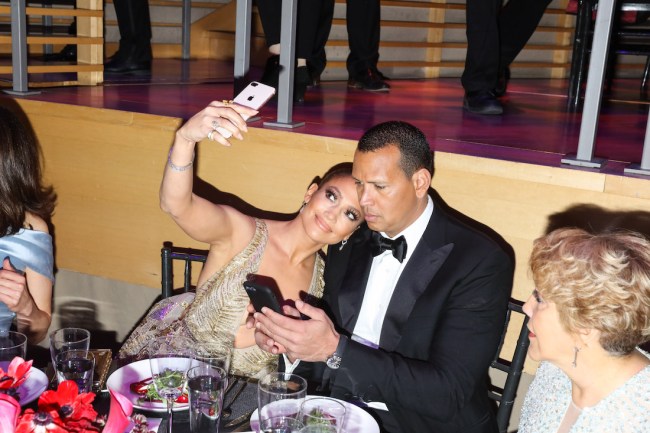 Everyone knows that breaking up is hard to do, but Alex Rodriguez — at the ripe age of 45 years old — seems to be learning that truth for the first time. As the world knows by now, the former MLB slugger and Jennifer Lopez called it quits in March, with rumors flying that A-Rod had cheated on J-Lo with some reality TV star who isn’t even popular enough for me to Google her name. So, yeah, Rodriguez cheated in baseball. He cheated on J-Lo. He allegedly cheated on his first wife, too. Sounds like a problem he might want to deal with.

But since sociopaths like Alex Rodriguez have a tough time looking in the mirror and accept any responsibility other than for how good their hair looks or how chiseled their abs might be, he reportedly isn’t giving up hope on rekindling his relationship with J-Lo. In fact, according to Us Weekly, A-Rod is so desperate to get Jennifer Lopez back that he’s just unwilling to move on.

“A-Rod will not give up on his and J. Lo’s relationship,” a source tells Us Weekly exclusively. “He is willing to do anything to make it work.”

“A-Rod flew to L.A. on Thursday night to see her,” the source explains. “J. Lo still doesn’t trust A-Rod all the way. She’s very skeptical, but she heard him out because she still has a lot of love for him.”

“J. Lo was always aware of the rumors of him cheating or him messaging other girls. You can say that for sure [that] played a part in why the engagement ended,” a second source told Us earlier this month. “She wants someone who’s fully invested in her and someone she can trust when her partner is not around.”

I don’t mean to pile on Alex Rodriguez, but, dude, this is exactly what people do when in middle school and their first crush breaks up with them in-between lunch and study hall via a note from a friend. This isn’t exactly something that a supposed grown-ass man does, and further proves how self-entitled the former slugger is. Let’s face it, despite all his misfortunes from cheating in baseball and on other women, he’s become a multimillionaire and TV analyst, clearly showing that his decisions haven’t stopped him from getting where he wants to be — or, in his mind, probably deserves to be.

Breaking up sucks, but it’s something we all experience at some point in our lives. And instead of taking it like a man and admit he royally messed up — like, really, who cheats on Jennifer Lopez, man? — Alex Rodriguez is sulking and sharing his sadness on things like social media. Dude, what in the actual hell? Again, pathetic.

I’m all about sharing feelings and expressing yourself in bad times, because mental health issues are a real thing. But does anybody actually feel bad for A-Rod when, you know, he brought all this on himself with the infidelity rumors? I sure hope not, because it’s a real bold move lying to a significant other and being shady behind their back. Sadly, that seems like Rodriguez’s M.O., whether it’s to earn fortune and fame through his tainted baseball career, or to cover up the fact that he cheated on one of the most talented and sexiest women on the planet.

According to reports, Jennifer Lopez has yet to actually return the $1.8 million engagement ring Alex Rodriguez got her, so, who knows, maybe the two just need some time apart and they eventually get back together. If that happens, allow our own middle school experiences predict how that ends — terribly.