Jennifer Lopez Reportedly Broke Up With A-Rod, Who’s Still Posting Pics Of Her, Because She Was ‘Miserable’ 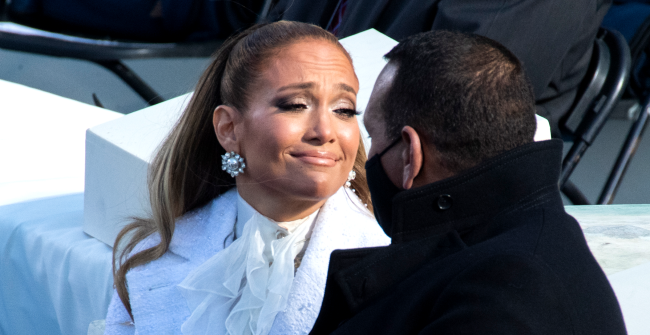 According to multiple sources, Jennifer Lopez broke up with Alex Rodriguez because she was “miserable” amid rumors that he had been cheating on her.

People magazine this week reports that a friend of Lopez said about the breakup, “She insisted on it. There are are too many issues that are unresolved.”

In the end, the sources say, Lopez could no longer fully “trust” Rodriguez, who flew to visit her in the Dominican Republic days after they publicly acknowledged on March 15 they were working through long simmering issues.

“She has been pretty miserable,” says the friend, “and didn’t think it was in her best interests to stay with Alex.”

Turns out that the whole coronavirus lockdown stuff was also affecting them negatively.

“They both liked spending more time together as a family, but it was difficult to keep that special spark when they saw each other every day,” said another source.

Related: JLo And A-Rod Were Reportedly Never ‘Working Through Things’ And His T-Wolves Deal Was The Dagger

Apparently, when Lopez took off for the Dominican Republic to shoot her new comedy movie Shotgun Wedding, that’s when the rumors of A-Rod going back on the prowl began to surface.

“Whether or not he has cheated doesn’t matter,” another source told People. “She won’t tolerate the fear of it in the air between them.”

That would jibe with an earlier report that Lopez was “so embarrassed” after the Madison LeCroy cheating rumors that she pretended that she and A-Rod were still cool for the media because she refused to let that be their breakup narrative.

Meanwhile, on the Alex Rodriguez front, he appears to still be not quite over the breakup as he continued to post pictures of JLo on social media this week.

On Wednesday, Rodriguez shared a montage of photos celebrating his daughter Ella’s 13th birthday and included among them were several of his daughter with Lopez as well as a video of him and Ella dancing at one of Lopez’s Las Vegas shows.

“Am I the only one to think it’s weird he included several (very sweet) pics with Jennifer here when he effed up the girl’s chance to have her as a stepmom?” commented one viewer.

No, it’s not weird. Not weird at all.