Alex Trebek Gives Amazing Update On His Recovery From Stage 4 Pancreatic Cancer, Is Now Near Remission 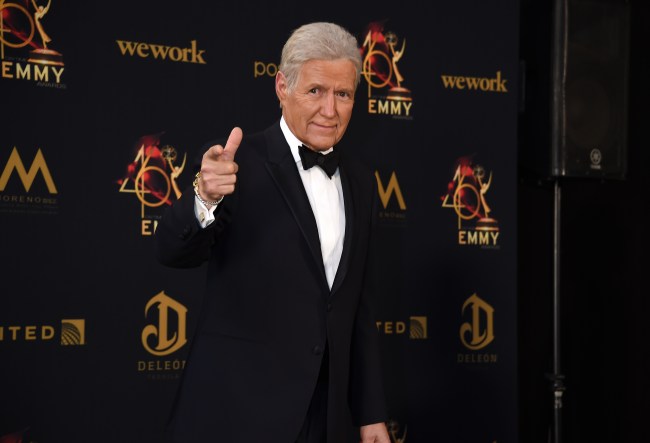 When Jeopardy! host Alex Trebek gave an emotional announcement a few months back that he had been diagnosed with Stage 4 Pancreatic Cancer, Trebek’s fans were devastated, myself included. I’ve literally grown up with this man on TV. I remember sitting by the TV before/after dinner with my parents and watching Jeopardy! as a kid, it was our family routine.

I’d go as far as saying that I’ve learned more throughout the course of my life up to this point than I ever did from *at least* 25% of my teachers in middle school. And hearing that Trebek’s life could have a rapid ending tore me up as I’ve lost close relatives to cancer within weeks of them being diagnosed.

The 5-year survival rate for patients with Stage 4 Pancreatic Cancer is quite small. Only 3% of patients make it five years after that diagnosis. Those are dismal odds but Trebek is a special human being, and back when he was first diagnosed with Stage 4 Pancreatic Cancer, Trebek had this to say to his fans: “With the love and support of my family and friends and with the help of your prayers … I plan to beat the low survival rate statistics for this disease,”

This morning, there’s a reason to be hopeful for Alex Trebek and his family. He gave an interview with People and it sounds like his body is reacting very positively to the treatment and things are going better than anyone ever expected.

When Jeopardy! host Alex Trebek was diagnosed with stage 4 pancreatic cancer three months ago, fans were shocked. But now the beloved Trebek has good news to share: He’s in “near remission,” according to doctors.
“It’s kind of mind-boggling,” the 78-year-old says, in PEOPLE’s new cover story. Although the cancer has a 9 percent survival rate, Trebek has been responding very well to chemotherapy. “The doctors said they hadn’t seen this kind of positive result in their memory…some of the tumors have already shrunk by more than 50 percent.”

Trebek says he’ll still have to go through several more rounds of chemotherapy to hopefully get into full remission, but he’s elated at how far he’s come.
He got emotional when he learned of the good news. “But they were tears of joy, not tears of depression,” he says. (via)

Pancreatic Cancer is a particularly painful and vicious form of cancer and the overall survival rate is around 9%, and it goes down to 3% for Stage 4 as I mentioned above. Alex credits his tens of millions of fans with helping him get through this time:

As for why he thinks he’s doing so well with the chemotherapy, which has left him weak and occasionally depressed, he mostly credits well wishes from fans and friends around the world.

“I’ve got a couple million people out there who have expressed their good thoughts, their positive energy directed towards me and their prayers,” he says. “I told the doctors, this has to be more than just the chemo, and they agreed it could very well be an important part of this.” (via)

It has to be so strange to be a public figure like Alex Trebek and go through a very personal fight with cancer but have it play out in the public eye. A few weeks ago, Trebek talked about how he’d gone through a period of ‘deep, deep sadness‘ in his battle with pancreatic cancer.

Recently, he discussed writing on the floor in pain caused by the cancer while filming Jeopardy!. But this morning the sun is shining a little brighter, the birds are chirping a little louder, and the future for Alex Trebek looks better than it did yesterday which is all you can ask for in the fight against cancer.

For more on this, you can click here to read the story on PEOPLE.