Alfred Molina To Return As Doc Ock In ‘Spider-Man 3’: Here’s What It Means For The MCU 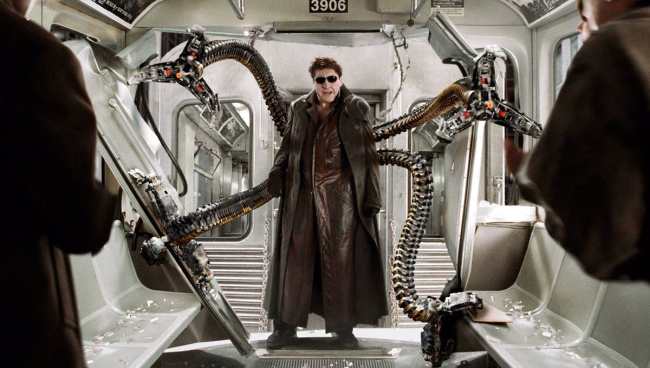 Well, well, well: in case it wasn’t already clear, it’s been confirmed now: Marvel Studios’ upcoming Spider-Man 3 is going to be an Avengers-sized film as it completely shatters the norms of comic book filmmaking and introduces the concept of the multiverse. Not only is Jamie Foxx already confirmed to appear as Electro from 2014’s Andrew Garfield-starring The Amazing-Spider Man 2, but now Alfred Molina, who iconically portrayed Doctor Octopus in 2004’s Spider-Man 2, is also set to appear in the film, according to The Hollywood Reporter.

The Spider-Man 3 chaos doesn’t stop there, though, as Benedict Cumberbatch is also set to star as Doctor Strange, while there have also been long-running rumors that the other two live-action Spider-Men from the 21st century, Tobey Maguire and Andrew Garfield, will factor into the project as well. Given the appearance of a villain from each respective Spider-Man iteration, it stands to reason both versions of Peter Parker himself will also appear.

In addition to the multiversal implications, this development also increases the possibility of seeing a live-action iteration of the Sinister Six, which was originally a goal of Sony’s with the Amazing Spider-Man franchise. With Foxx’s Electro and Molina’s Doc Ock already joining a universe that includes Michael Keaton’s Vulture and Michael Mando’s Scorpio (not to mention, Jake Gyllenhaal’s Mysterio can *easily* be worked back into the fold), the culmination of iconic Spidey villains seems to be closer than ever.  Given the way Far From Home ended — Peter Parker being publicly identified as Spider-Man — another enemy or two could certainly join the fray.

The question now becomes how Marvel Studios will introduce characters from other universes and how they’ll be able to properly balance all of that screentime. With the success of Avengers: Endgame, the former concerns me far more than the latter. The MCU has, if at all, barely introduced the idea of the multiverse into the franchise and is now planning to unleash a tidal wave of it in one film. While Strange’s involvement and the title of his upcoming sequel (Doctor Strange in the Multiverse of Madness) make it clear his sorcery is going to be involved in this universe-bridging, it’s still a secret as to whether or not he’ll be the cause or the effect. Will Strange be the one who opens the gateway or the one who’s tasked with closing it? Will he come to Spider-Man or will Spider-Man go to him?

Regardless of what narrative route Marvel Studios goes down, this is, at its core, a massively positive development for fans of comic book movies, as introducing the storytelling Pandora’s Box that is the multiverse serves as an embrace of one of the medium’s core tenants: the multiverse is comic books. Even on a micro-level, forgetting the overarching storytelling implications, simply seeing Molina suit up as Doc Ock again, the main villain in the best Spider-Man movie of all-time should be thrilling for fans of the old and the new trilogy. Just imagine fathers explaining to their sons: “Ya know, he was in the Spider-Man movies from when I was in high school.”

Had any other studio tried something this grand, my concern that the film will collapse under its own complex weight would be much higher, but Marvel Studios has spent a decade doing nothing other than proving they know exactly what they’re doing.

At this time, the still-untitled third Spider-Man film is set to hit theaters on December 17, 2021.

We discussed the massive implication of Spider-Man 3 on the Post-Credit Podcast a few weeks ago, so make sure to check that out if you want further analysis of how the MCU is working towards a full-blown multiverse.