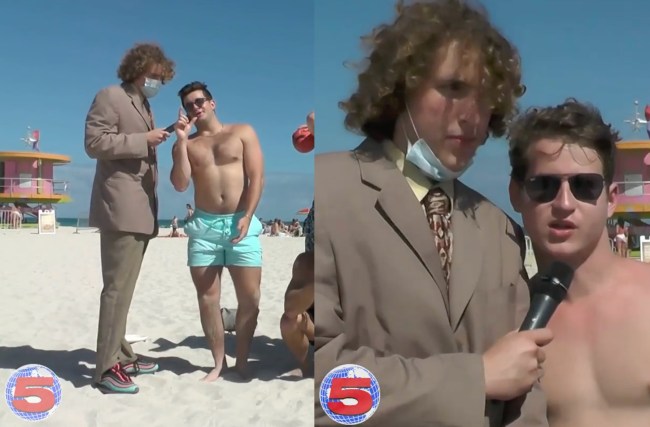 All Gas No Brakes is easily one of the best YouTube channels to pop off in recent memory. It absolutely exploded last year for great reason – In a heightened political climate, the channel’s host, Andrew Callaghan, managed to perfectly capture America’s weird and wild underbelly at a very precise moment in history, like a YouTube / TikTok crossbreed of Hunter S. Thompson,  Werner Herzog, Lester Bangs, and a little bit of GG Allin-era Todd Phillips.

All Gas No Brakes came to a dramatic halt a couple weeks ago during a labor dispute between Callaghan – the show’s creator and front-of-camera host – and Doing Things Media, the meme empire behind wildly popular Instagram accounts like @MiddleClassFancy and @ShitheadSteve.

Callaghan decided to part ways with the company after signing “an employment contract without reading it”, causing him to abandon the All Gas No Brakes name and social media channels to go indie. As he explained to Vice, Andrew convinced the company to buy an R.V. and pay his crew to “make a sick show” that captures a “cultural exploration of America.” That came with strings attached. Issues of creative control over All Gas No Brakes were brought up in the company’s pursuit to monetize its popularity, ultimately leading to both parties parting ways.

via the NY Times:

“We’re really bummed it didn’t work out with Andrew,” Doing Things CEO Reid Hailey told the Times in a statement. “He was the heart and soul of the show. It was a special moment in time and we’re excited we got to be a part of it. We wish him the absolute best and we’ll be watching along with everyone else for where he goes next.”

It was obvious that All Gas No Brakes was dead in name only, with Andrew and his crew now free to chart their own destiny as independent digital creators, supported by fans behind a paywall.

Now we officially have an idea of what that looks like:

Yesterday, Andrew launched an independent journalism venture called Channel 5 on Patreon. Andrew made the announcement on his Instagram:

Happy to announce I am back on the road + back in action interviewing people with the same crew, just with an INDEPENDENT new show called Channel 5. If u wanna support, go follow @channel5 and sub Patreon

On Patreon, the Channel 5 crew elaborated on the new subscription-funded venture, along with how they’ll be spending money from their fans. Tiers start at $5 and $10, giving Patreon’s access to content on an unlisted YouTube channel.

From the crew that brought you All Gas No Brakes, we are so excited to have you back to witness the genesis of Channel 5 — a completely independent, digital journalism experience brought to you by Andrew Callaghan, Nic Mosher and Evan Gilbert-Katz.

A few months ago, we lost our platform, Patreon page, and primary source of income due to a contract dispute which was detailed in this New York Times article by Taylor Lorenz.

However, this was only a minor setback. Using the money we’ve saved over the years, we’ve purchased a set new camera equipment, and once again have hit the road. We will be committed to traversing the country and bringing you the rawest reportage of cultural happenings and major news events for the remainder of 2021 and beyond.

If you’re here, thank you. The crowdfunding from this Patreon will be our lifeline and go solely into Channel 5 and our current and future journalism adventures.

Beyond travel and equipment expenses, we hope to expand Channel 5 internationally, purchase a wrapped news van, and ideally, hire a fleet of correspondents to ensure that no major event goes uncovered, from Greenland to Afghanistan.

It’s just as absurd as you’d expect it to be.

If you’re a fan of what these guys do – and a fan of independently owned and operated media ventures in a sea of loud, noisy corporate media owner/operatorship, go give throw them a couple bucks.

It’s worth it for the hard-earned laughs.

Also, the upcoming one about punk rock in Los Angeles looks wild. The lack of shirts and nitrous balloons are outrageous.