Alyssa Milano Goes Off On People Accusing Her Of Wearing Blackface 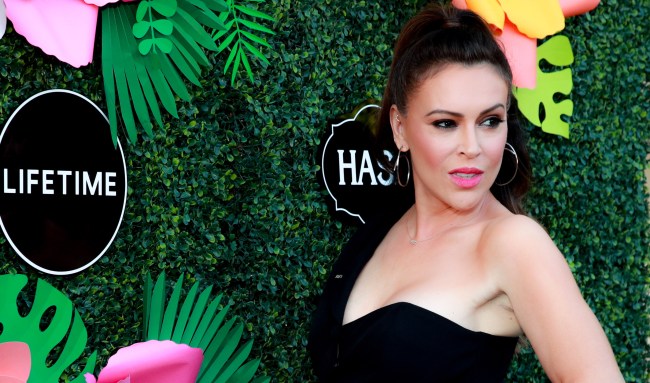 Alyssa Milano, the actress turned political activist and entrepreneur, is not happy that people are accusing her of wearing blackface in a 2013 parody video she shot for Funny Or Die.

The 47-year-old star went off on Twitter on Tuesday after an article appeared on the internet which said, “Alyssa Milano Facing Backlash Over “Blackface Scandal” After Damning Photo Comes Back To Haunt Her.”

“Hey, assholes. The below picture is me parodying Jersey Shore and Snookie’s tan, Milano wrote.

“Snookie’s tan (she is a sweetheart by the way) is worthy of parodying as is Trump’s ‘tan’.

“So go fuck yourselves with your smear campaign.”

Hey, assholes. The below picture is me parodying Jersey Shore and Snookie’s tan.

Snookie’s tan (she is a sweetheart by the way) is worthy of parodying as is Trump’s “tan”.

So go fuck yourselves with your smear campaign. Here is the link to full video: https://t.co/mu9zy7csCX pic.twitter.com/XuTVUN29R3

Milano also provided a link to the video.

Despite her vehement denial, a lot of people still weren’t buying Milano’s excuse for changing the color of her skin, parody or not.

Got it! Purposely altering the tone of your skin to a drastically darker tone in order to make fun of someone else's skin color- who is not African-American, is *not* racist (because Alyssa said so). I'll need to put that in long-term memory.

Fair enough. What's the explanation for this? pic.twitter.com/sUCJgmBIc4

If you love Snooki, you would know she is Chilean of Spanish indigenous (mestizo) decent. Like most marginalized groups, as a young person, she suffered with self esteem issues and an eating disorder. Pursing your lips and being in black face is very offensive.

I don’t know… it looks like Milano is going to have to take an L on this one. While what she did may not technically be blackface, mocking someone’s ethnicity or skin tone, regardless of what race they are, is something one really shouldn’t do, right?

Look at it this way, if The Golden Girls are getting an episode pulled from Hulu because of them wearing mud masks, then what Milano did was certainly worse than that.