Amazon Honcho Jeff Bezos Says He’s Sending A Spaceship To The Moon, But Will There Be Free Two-Day Delivery? 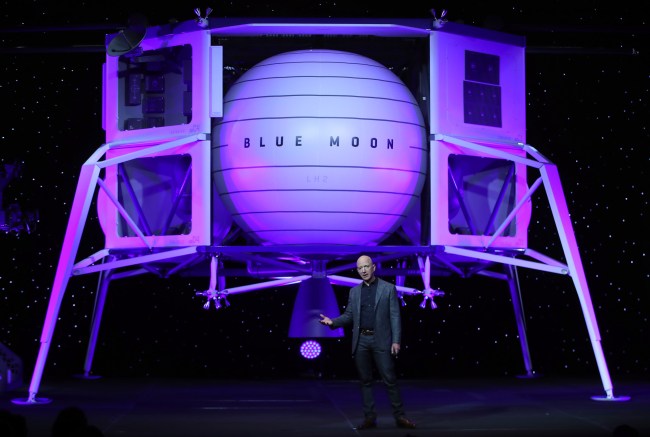 Remember that story about how Elon Musk is going to be sending a Japanese billionaire to the moon in his spaceship, hopefully by 2023? Yeah, well screw that, Amazon founder Jeff Bezos is going to blow that space mission right out of the, uh, sky… sorry, probably not the best visual there.

Anyway… Bezos is not only planning on sending a spaceship to the moon through his Blue Origin company, he wants to create giant floating colonies around the Earth. Pffft… screw Mars, Musk. The moon is where it’s at, bro.

Elon Musk has said that he would like his SpaceX company to have an inhabitable city on Mars by 2050, but Bezos’s plan is to send humans to the moon as early as 2024.

He even unveiled a spiffy new Blue Moon lander at the Washington (D.C.) Convention Center during a speech on Thursday.

Bezos envisions a trillion humans in the solar system, with “a thousand Mozarts, or a thousand Einsteins.” In his vision, they would be living in colonies similar to the ones developed by physicist Gerard K. O’Neill.

O’Neill explained that humans are unlikely to live on planetary surfaces, as they’re small, far away, and essentially unable to support real-time communication. They also lack Earth-like gravity. Instead, they would live on something like this:

These colonies are vast, with the International Space Station a tiny dot in comparison. Centrifugal force would be used to create artificial gravity, similar to the structures in Stanley Kubrick’s 2001: A Space Odyssey. Each colony would hold one million people. These colonies could create “pleasant” places to live, similar to Earth-based cities.

Humans could create recreational colonies, with zero gravity for flying around for fun.

They could replicate the most tropical regions of Earth, which Bezos described as “Maui on its best day.”

Bezos is now showing the audience futuristic space communities that he says are beautiful and could be located close to Earth. #blueorigin pic.twitter.com/3OUSc0yCa0

Soooo… what do you think? Are you down for living in space? “Maui on its best day” does sound pretty sweet.

Although… living in space in an artificial ecosystem built by the largest retail company in the world because our planet can no longer sustain the human race does sound a tiny bit familiar.

Eh, I’m sure it will all work out fine. Right, Jeff?