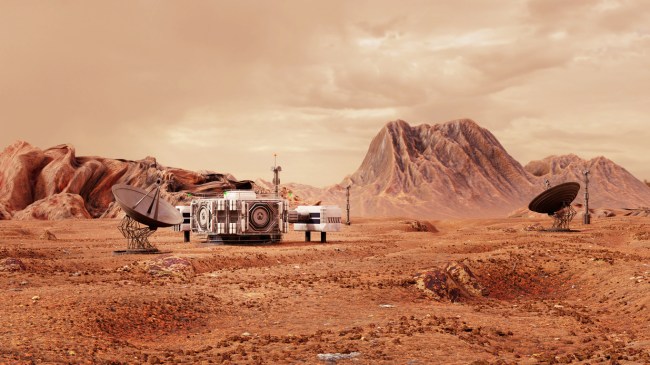 In one of his most notable speeches, John F. Kennedy announced he had made it his mission to send astronauts to the Moon by the end of the 1960s and give the Soviets the finger in the process.

We’d go back to the Moon a few times before people got tired of one of the most impressive feats in the history of mankind, and since then, we’ve been looking for a new galactic target to conquer and found one in the form of Mars.

In recent years, Elon Musk and SpaceX have led the charge by developing technology with the goal of transporting humans to the planet and have previously said they could send people hurtling through space by the end of this year (although there’s a chance you might not make it back).

Musk has said his overall goal is to figure out a way to colonize Mars within the next six years or so—which may have something to do with his desire to have a place to escape to if WWIII happens—and based on what he said earlier this week, you should be able to afford to make the move assuming you’re willing to sell all of your earthly belongings.

However, Musk wasn’t the first person to tackle this unconquered frontier. In 2013, a Dutch company called Mars One announced it was allowing people to apply for one-way tickets in an attempt to colonize the planet, but if you happened to be on the waiting list, I regret to inform you that you’re shit out of luck.

According to CBC, the company—which was planning on transporting groups of people to a colony on Mars starting in 2024— recently declared bankruptcy and delivered a devastating blow to the 100 people on the short list in the process:

“We are currently working with the administrator and an investor to find a solution moving forward, though at this moment that is all we can share,” the company said in an email.

The bankruptcy affects the company’s commercial arm, Mars One Ventures AG, but does not affect the non-profit Mars One Foundation, the email said.

A press release notes the company is “currently working on a solution with an investor.”

Let’s hope Musk can pick up the slack.