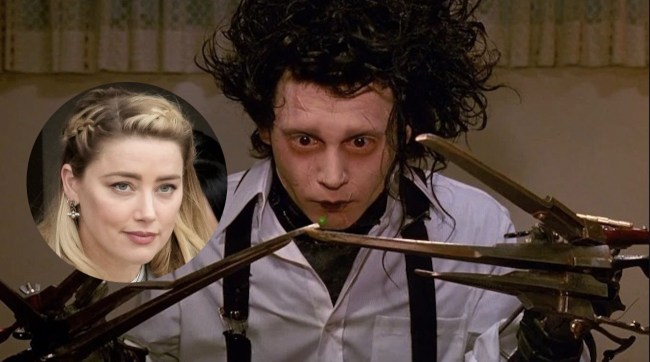 During her first post-trial-loss interview with NBC News’ Savannah Guthrie, actress Amber Heard — who was ordered to pay her ex-husband Johnny Depp $15 million as a result of the court ruling in Depp’s favor — implied that Depp is such a good actor that he convinced people that the main character from Edward Scissorhands actually had scissors for hands.

Heard’s comments about Tim Burton’s famed 1990 fantasy film came after Guthrie mentioned how Depp’s lawyer called her testimony the “performance of a lifetime” and said she was acting. In response, a frustrated Heard said “Says the lawyer for the man convinced the world he had scissors for fingers?”

100% convinced we’re living in a simulationpic.twitter.com/XonN6TX6ps

Needless to say, the internet was quite befuddled by Heard’s logic, as it’s safe to assume that no one ever actually believed that Edward Scissorhands was a real person with real scissors for real hands.

Am I having a stroke?

Ironically, Edward Scissorhands is a movie that encourages tolerance and compassion instead of assuming a shy, traumatized man is dangerous instead of just weird. It's a fantastic film and Tim Burton at his visual best! If you haven't seen it, give it a watch. https://t.co/Wvlhu7Aacr

Dear Amber Heard, I’m not sure you truly understand a few important things.

1) Edward Scissorhands was a character Johnny played. I don’t believe he wore those scissors to court.

2) Giving a “Performance of a lifetime” does not = being a GOOD ACTOR#JohnnyDepp pic.twitter.com/eMIP0cm72S

So wait….is Johnny depp edward scissorhands?? Because I thought he was captain jack sparrow….

Needless to say, Heard’s comments in the aftermath of the trial certainly haven’t helped her standing in the court of public opinion — in the weeks since the verdict, a petition to have her removed from Aquaman and the Lost Kingdom surpassed 4.5 million signatures.

The calls for Heard’s removal from the film have become so widespread, in fact, that the studio sources have had to leak out statements confirming that she remains a part of the billion-dollar-grossing franchise.

RELATED: Studio Puts Out Word That Amber Heard Has NOT Been Fired From ‘Aquaman 2’ After Fake Report About Her Being Recast Goes Viral