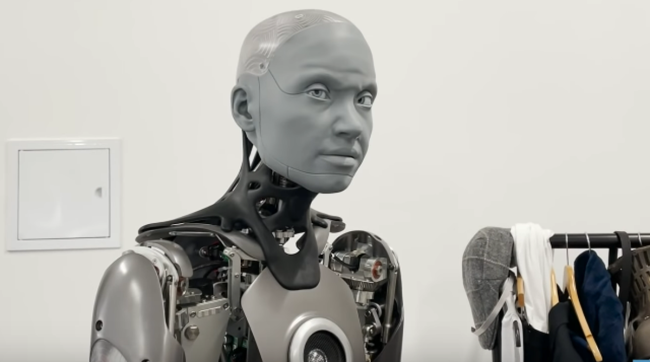 Ameca, a robot that makes startlingly human-like facial expressions, was at the recent CES trade show doing a little meet and greet when one wise guy decided to try and hit on her. It did not end well for him.

Billed as the “world’s most advanced” humanoid robot, Ameca has a fully articulated head, face, neck, shoulders, arms and hands, and apparently, some sarcastic wit.

The company that created Ameca, Engineered Arts, claims she is “the perfect humanoid robot platform for human-robot interaction.”

Not for one guy.

During her appearance at the CES trade show in Las Vegas, a woman was filming Ameca and was very excited that the robot recognized that she was wearing a pair of bunny ears.

It was at that point that a man jumped in and asked Ameca, “Do you have a boyfriend?”

“I do not have a boyfriend,” Ameca replied. “Are you asking for a friend?”

“I’m asking for me,” he answered back.

“I see. Unfortunately, I am not on the market,” Ameca responded. “Robots do not have relations.

“Do you have a boyfriend?” Ameca then asked the man.

“She got jokes!” the man said with a chuckle.

“I’ll take that as a yes,” Ameca shoots back as the crowd busts out laughing.

Welcome to the future, fellas, where not even someone like Will Smith has a shot at dating a robot.