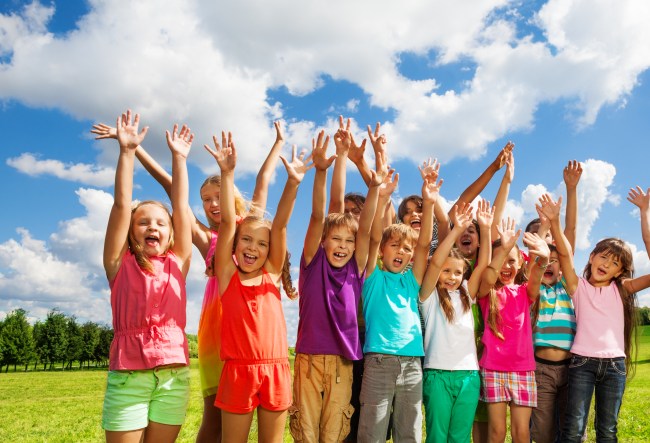 If I were a betting man, I’d say it’s unlikely that schools will reopen this fall. Kids wipe their boogers on each other too often for a playground to be safe right now. Which means that all of a sudden, we have a lot of kids with nothing to do. Numerous studies have probably come out showing that kids get into trouble in the hours after school and before their parents are done with work. That unsupervised window is when tattoos and axe body spray blow torches happen. Now, take away school and that window extends to the entire day. That’s a lot of tattoos.

America is home to some 74.1 million kids under 18. We can round that down to 74 million because 100,000 kids aren’t going to get anything done. 100,000 kids is an absurd number of children. Imagine a summer camp with 100,000 kids? How many damn counselors would you need to keep that group organized? How many bandaids would you need? Forget it.

So we have 74 million kids. Now, a lot of those kids are going to suck at everything—from reading at a tolerable speed to operating machinery responsibly, anyone under the age of 9 is worthless. Sorry, harsh but fair. Therefore, we’re going to focus on the 10-17 range while the youngsters germinate. That still leaves us with 32 million kids who can get shit done. 32 million! Nike built an empire with far fewer.

The billion (maybe trillion)-dollar question: what is the best use for 32 million 10-17-year-olds? Sure, you could organize, and bet on, an ENORMOUS game of dodgeball. You could have them run a mile, take the top 500 finishers, and put them into some sort of Olympic development program. You could create a human chain to the ocean and probably put out the California wildfires for good. If Wayfair’s cabinets taught us anything, it’s that kids are great at fitting into small spaces. Maybe you could have them dig tunnels for new subway systems? Fill potholes on highways given that traffic is down? Pick raspberries off the vine to fill those turquoise cartons that take forever to fill? Assign a child to each household to replace batteries, lightbulbs, and toilet paper? Kids are great at doing tasks so easy that even a child could do it.

But let’s be serious: we need these kids for manufacturing. That’s where their little paws will FLY. The question is, what should they manufacture?

Masks are the boyscout answer. Most of these kids aren’t smart enough to work on a vaccine, or ventilators probably, but they can sew masks. However, let’s dispense with the “for the good of the world” altruism. This entire exercise is a fantasy; the right kind of fantasy that colors within the lines. Chill.

I want my army of teens and preteens making cigarettes. From planting the tobacco fields to harvesting the crop to drying the leaves to rolling the darts, children are the solution to the perfect cigarette. I’m not a smoker, but if things continue the way they are, I suspect we’ll see a nationwide return to the nerve-soothing comforts of big tobacco. We’re facing a glorious cigaissance, and we need to start preparing ASAP. For right now, cigarettes are extremely expensive thanks to the surgeon general, Mad Men, and Michael Bloomberg or somebody. If we don’t have a supply to meet the explosive demand come fall, things could get ugly.

I’ve heard that hand-rolled cigarettes taste far better than those cartons you buy at the airport for your pen pal in France. Think of how well a 10-year-old’s fingers could roll a cigarette. Tight, clean, and ready to burn so slowly, so evenly, that you wonder if it will ever end. It will, inevitably, which is a sad moment. Except… look! A brand new, fresh cigarette, placed in your mouth by the gloved hand of your 14-year-old cigarette valet who, my goodness! has the lighter ready to go. It’s as if you never stopped smoking at all—fortunate, given how stressful your job has become. You don’t even have to look up from those Microsoft Excel spreadsheets you totally understand; just keep sucking ’em down and VLOOKUP’in away. Our army of preteen tobacco experts have you covered.

That’s my solution. Let’s hand the reigns of America’s fledgling, resurgent tobacco industry over to our unencumbered youth. Leaders will emerge while the weak fall under the heartless wheel of commerce. But in the end, we’ll teach the next generation the importance of a hard day’s labor. And in a time of respiratory uncertainty, that lesson is invaluable.