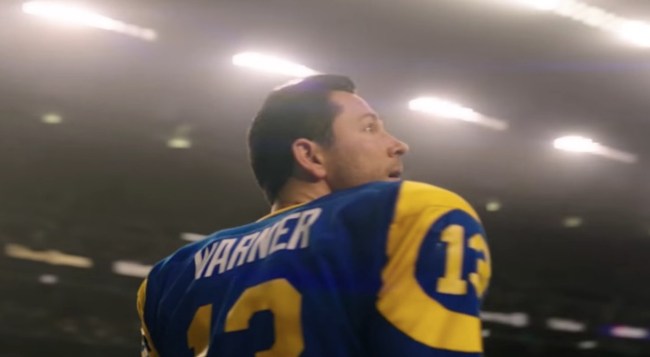 First things first: I had NO idea that Anna Paquin — who’s playing Kurt Warner’s wife and famously starred in True Blood and the original X-Men franchise — was an ACADEMY AWARD-WINNING ACTRESS. Like, an Oscar winner. Granted, she took home the prize when she was just 11-years-old back in 1993 (the year I was born, by the way) for her work in The Piano, but an Academy Award is an Academy Award and no one can ever take that away from here. So, good for you, Anna Paquin. You go Anna Paquin. Now, onto Kurt Warner’s unintentionally hilarious biopic.

Look, no offense to Kurt Warner, as I really loved watching him and The Greatest Show on Turf as a kid: but did we really need a Kurt Warner movie THIS soon? Or frankly, at all? When’s the last time you heard someone say: “You know who I wish I knew more about? Former St. Louis Rams, New York Giants, and Arizona Cardinals quarterback Kurt Warner.” And if we were going to make a movie about him, wouldn’t one about his late-career revival and Super Bowl run with the Arizona Cardinals be far more exciting? I don’t know. Maybe this is why I’m a writer and not a producer.

If we’re entering the era of churning out movies about modern-day QBs, though, then give us a Brett Favre movie, damn it. That man’s life was, as the kids say, “a movie” — so I can only imagine how that’d translate into an *actual* movie. If American Underdog is a trip to church, the eventual Brett Favre movie will be like heading down to the strip club. That’s the movie I want to see.

Here’s the official synopsis for American Underdog: The Kurt Warner Story, via IMDB:

The story of NFL MVP and Hall of Fame quarterback, Kurt Warner, who went from stocking shelves at a supermarket to becoming an American Football star.

I’m going to be “that Rams fan” while watching this movie unfold. In the trailer for American Underdog, Zach Levi is wearing this hoodie during a meeting with Mike Martz before he gets the nod to be the starter for the Rams. This logo didn’t come out until the year after… pic.twitter.com/FUNGjrl3JY