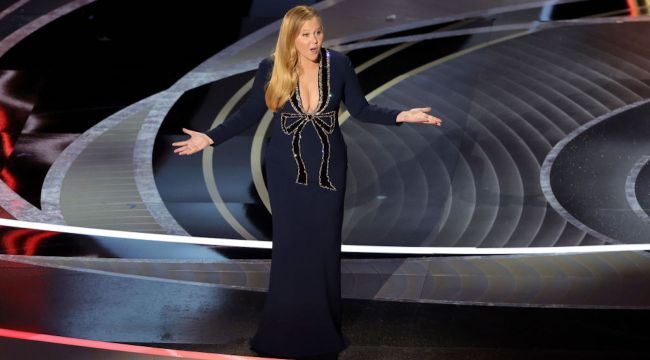 Last week, we brought you the story of Twitter users uncovering a tweet from December 2021 that was virtually identical to a joke that Amy Schumer told about Leonardo DiCaprio during the 2022 Oscars on Sunday, March 27.

“Leonardo DiCaprio, what can I even say about him,” Amy Schumer said about DiCaprio. “He has done so much to fight climate change and leave behind a cleaner, greener planet for his girlfriends. Because he’s older and they are younger.”

A version of that punchline, however, was tweeted by Twitter user @NicoleConlan back on December 23, 2021.

Having seen the allegations of plagiarism online, Schumer has since responded to the claims that she stole the Leo joke in typical Amy Schumer fashion, saying that she’s “funny enough” that she doesn’t need to “steal shit.”

“OK. Well, I would like to say, I haven’t personally been on Twitter,” Schumer on Bravo’s Watch What Happens Live. “I’ve had my assistant do it, just so I can remain alive and not kill myself. And also, that joke was written by Suli McCullough. But I thank you guys, always, for making sure that I don’t start thievery.

“I just got to do a lie-detector test on Vanity Fair and they asked me, thank God, ‘Have you ever stolen a joke?’ and I said no, and it was ‘that’s true.’ So, everybody just chill. It’s crazy. I’m funny enough, I don’t need to steal shit.”

The fact is, whether or not Schumer believes she’s ever consciously plagiarized a joke, she was previously accused of stealing material from comedians such as Tammy Pescatelli, Kathleen Madigan, Wendy Liebman, and Patrice O’Neal.

In addition to her comments about the DiCaprio joke, Schumer also recently claimed that she had jokes about Joe Rogan, Alec Baldwin, and James Franco planned for the broadcast but was allegedly prevented from telling them.