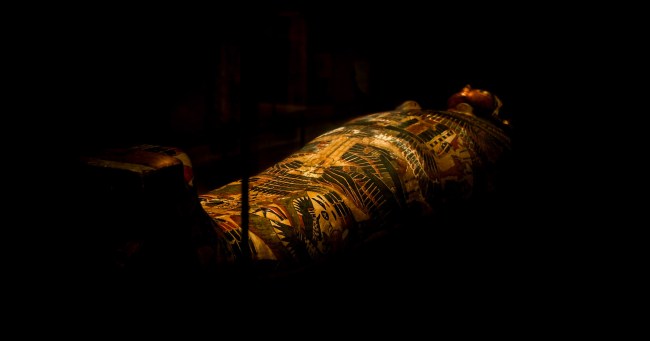 Oh man. The people who believe the pyramids were built by aliens (actually, they probably were) are going to go nuts when they see this story about mummies with gold tongues.

Archaeologists in Egypt were excavating an ancient site called Taposiris Magna when they came across a remarkable discovery: 2,000-year-old mummies with gold tongues.

The team of archaeologists from Egypt and the University of Santo Domingo in the Dominican Republic reported that while the bodies were in a poor state of preservation, the gold tongues looked to be pretty much in tact.

So, what’s up with that?

Well, the speculation is that these deceased Egyptians either had their tongues removed and replaced with these amulets of gold foil in the form of a tongue, or it was simply placed in their mouths before burial.

So they could speak with the Gods in the afterlife, of course. At least that’s what the Egyptian antiquities ministry says.

Not coincidentally, the dig site, Taposiris Magna, also has temples dedicated to the god of the after life Osiris, as well as to Isis – the wife and sister of Osiris. Their relationship was… complicated.

LiveScience reports that archaeologists had previously discovered a number of coins bearing the name and likeness of Queen Cleopatra VII, which suggest that these temples were in use during her reign.

The other 15 burials also date back around 2,000 years and contain remarkable treasure. In one, a female mummy is wearing a death mask that covers much of her body and depicts her with a headdress while smiling.

Two of the mummies were found with the remains of scrolls, which scholars are currently analyzing and deciphering. The plastered layers, or cartonnage, encasing one of these mummies has golden decorations of Osiris, the statement said.

The researchers also found several statues that depict the people who were buried at the site; the statues are so well preserved, you can still make out the individual’s hairstyles and headdresses, the statement said. The statues give the people a formal look, with no smiles on their faces.

Excavation of the site, led by Kathleen Martinez, an archaeologist from the Dominican Republic, is still ongoing.