‘Are Chicken Wings A Meal?’ Is The New ‘Is A Hot Dog A Sandwich’ Thanks To NY Governor Andrew Cuomo 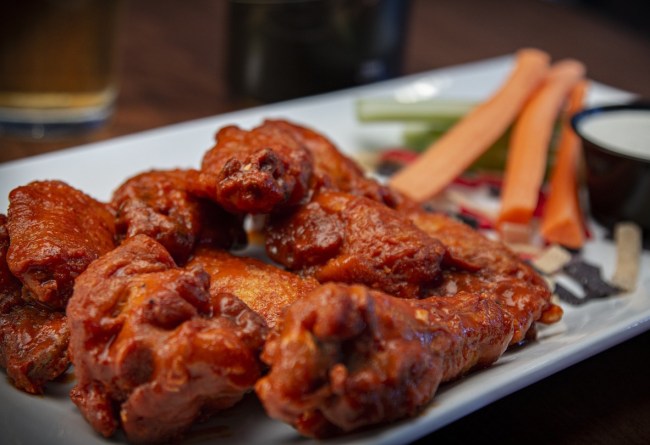 New York governor Andrew Cuomo has never been the most popular guy in the state since he was elected in 2011, and while he managed to beat Miranda from Sex in the City when she staged a primary challenge in 2018, he didn’t exactly inspire a ton of confidence when he failed to legalize marijuana the following year despite vowing it was all but a done deal.

He made it illegal to declaw cats though, so, um, I guess that’s something.

Weed was expected to actually pass earlier this year but that legislation ultimately never materialized, which is fairly understandable when you consider there was a slightly more pressing matter in the form of the pandemic that crippled the state back in March.

There are plenty of people who’ve criticized Cuomo and other officials in New York for not taking preventative measures that could’ve mitigated the crisis that eventually unfolded, but regardless, he was widely praised for how he handled the situation and his daily press briefings received national attention as his efforts helped New York slowly but surely flatten the curve.

Cuomo’s approval rating reaped the benefits of his actions, as he’s more popular than he’s ever been during his nine years as governor.

It's amazing what 6 months of MSM gaslighting can do to approval ratings.

Since Last November:
– DeSantis down 24pts
– Cuomo up 17pts

New York has had 600% more fatalities from Coronavirus than Florida. pic.twitter.com/yhkpBAWg0x

However, he seems incredibly intent on shedding some of that goodwill based on some questionable decisions he’s been making over the past week.

As someone who was lucky enough to be sharing an apartment with a nurse in New York City when the shit hit the fan, trying to find positives in the situation was like combing through the pit full of needles in Saw II. However, one upside eventually appeared when bars started offering drinks that weren’t technically legal to drink in public but just so happened to be served in a plastic cup and with a straw. In addition to making the depressing new reality a bit more bearable, it also allowed you to support businesses in need of all the help they can get during uncertain times.

I personally haven’t experienced any issues, but there have been more than a few instances where large groups of drunk, maskless assholes have been observed congregating outside drinking establishments. In an attempt to address the issue, Cuomo went down a very interesting route last week when he issued an edict requiring food to accompany any alcoholic beverage that’s ordered.

If he had put even two seconds worth of thought into that decision, he would’ve realized there was a loophole the size of a Star Destroyer, and bars and restaurants around the state responded by whipping up custom menus offering food items for as little as a penny to comply.

As a result, the State Liquor Authority scrambled to crack down by attempting to define the types of items that are acceptable. At first, it issued new guidelines that specified “sandwiches, soups, or other foods, whether fresh, processed, precooked or frozen.” After realizing the inclusion of “other foods” nullified the entire thing, it clarified it intended to refer to “foods which are similar in quality and substance to sandwiches and soups,” citing salads, chicken wings, and hot dogs as examples of items with enough “quality and substance.”

Welp, it appears no one told Cuomo about that, as things officially went off the rails during a press conference on Thursday where he attempted to do some clarifying of his own and failed spectacularly, as he made a number of baffling claims—the most notable of which is that chicken wings are not “substantive” food.

Earlier today, Governor Cuomo said chicken wings are not substantial food for bars to be allowed to sell alcohol. He added that sandwiches were the "lowest level" of substantive food. #Buffalo His comments: pic.twitter.com/zaSXgfEq6S

There’s a lot to process here, as Cuomo opened up his statement by suggesting all bars were equipped to sell “soup, sandwiches, etcetera” (that’s not how “etcetera” works!) prior to the pandemic. This simply isn’t true, as there are plenty of places that offer free popcorn and literally nothing else. He then proceeds to call out not just hors d’oeuvres but chicken wings in particular, which I take as a personal attack.  He then caps all of this off by defining the “lowest level of substantive food” as sandwiches, meaning he either A) contradicted his first point 15 seconds after making it or B) seems to think soups are somehow a heartier option.

I had a brief Ron Paul phase back in high school but I would not describe myself as a libertarian. However, how can you possibly think this is remotely acceptable? I know Cuomo has a long history of telling people that he knows what’s best for them and covering his ears and going “LA LA LA, CAN’T HEAR YOU!” if they object, but this is insane.

Why is the governor of a state telling me what is and isn’t food? Have I actually been doing everything wrong my entire life? Like, I thought my stomach has done a pretty good job telling me that I’m full after crushing a dozen wings and two pitchers of beer in an unhealthy amount of time but perhaps…it’s been lying to me? Fuck, man. Fuck.

Also, I’m sure this will go over really well with his constituents in Buffalo. “Hey, guys. You know that food that is the only thing your city was known for before people started jumping through flaming tables at Bills games? Get this—it’s not food!”

I didn’t really think 2020 could get any dumber and now there’s a very real chance a judge is going to have to tell us which foods are foods. What a world.