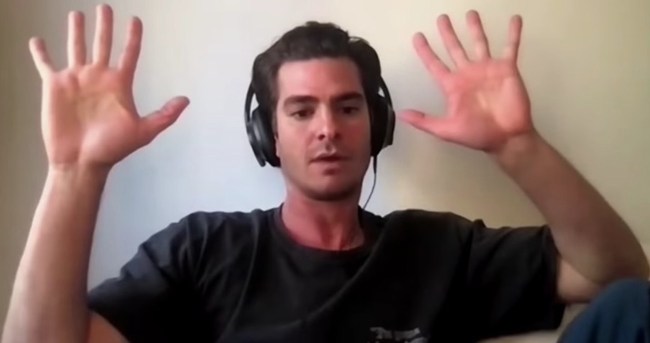 I’m actually starting to feel sorry for Andrew Garfield. At least as bad as one can possibly feel for a rich, handsome, internationally famous Oscar-nominated actor. This dude is just being fed to the wolves and simply does not have the necessary tools to defend himself. For an Academy Award-nominated actor, the man is a PITIFUL liar, which is a character trait that’s been hilariously popping up quite frequently over the last few months. Garfield essentially cannot have a camera pointed at him these days without being asked about Spider-Man: No Way Home, and every time it happens, he seems to become less and less convincing.

Just last week, for example, Garfield sat down for an interview with Variety where he acknowledged the fact that no matter what he says about Spider-Man, no one is going to believe him. And that’s true. But that still doesn’t change the fact that — more so than his words — his body language is an absolute shambles: Garfield seems to literally squirm in his seat whenever he’s asked about No Way Home.

That trend continued on Monday night as Garfield appeared on The Tonight Show with Jimmy Fallon to promote his upcoming film The Eyes of Tammy Faye. Naturally, Fallon asked Garfield about No Way Home, and the 38-year-old actor put forth yet ANOTHER pitiful denial.

“There’s a photo going around on the internet of you and Tobey Maguire on the set of the new Spider-Man,” Fallon said.

“I’m not sure about that,” Garfield replied.

“You’re going to be in the new Spider-Man, congratulations!” Fallon said.

“Wait what?! I had no idea… If you show me the photo, I can tell you whether it’s me and if it’s real. I heard about it, and I did see it, and it’s a photoshop. I’m trying to manage to expectations. If they want to give me a call at this late, late stage of the game, I’m sitting here in my tracksuit.”

The sooner Spider-Man: No Way Home hits theaters, the better, especially for Andrew Garfield’s sake, who may spontaneously combust if he has to lie about it anymore.