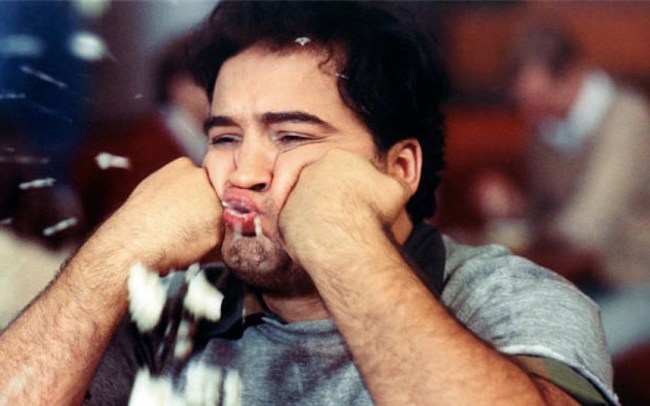 Animal House debuted on July 28, 1978, and has since been recognized as one of the greatest comedies of all-time. The St. Paul Saints, an independent baseball team based out of St. Paul, Minnesota, honored the classic comedy in the proper way — with a gigantic food fight.

On Tuesday night, the Saints hosted the Sioux Falls Canaries. But that isn’t important right now, what is important is that an entire baseball stadium engaged in an epic food fight. is there a better Tuesday night than hanging around with a bunch of animals, getting drunk, and throwing hot dogs at each other? The answer is “no.”

Fans were given ponchos to protect themselves from the hurricane of prepared food packets that included mashed potatoes, marshmallows, powdered donuts, and popcorn. After the final out in the 5th inning, the food fight commenced when the infamous scene from Animal House was played on the Jumbotron. Bluto approves. “I’m a zit. Get it?”

Before the fun police attacks the Saints organization, you should know that the team encouraged fans to bring non-perishables to the game that would be donated (No word on if the food came from Food King). The Saints, which are part of the American Association of Independent Professional Baseball, matched every dollar spent on the food fight with a donation to a local food bank.

Fat, drunk, and stupid is exactly how one should enjoy a giant food fight.

RELATED: Could ‘Mouth Cooking,’ When You Chop Food By Chewing It Then Spit It Out, Be The Next Culinary Trend?

RELATED: Watch The Evolution Of Bill Burr’s Stand-Up Comedy From 1995-2017