This Trailer For ‘Godzilla vs. Kong’ Knockoff ‘Ape vs. Monster’ Needs To Be Seen To Be Believed 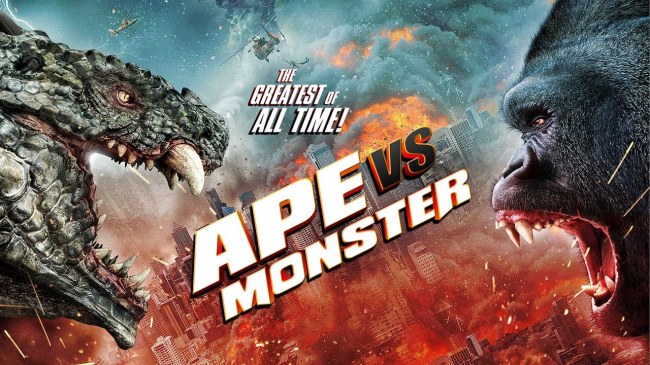 I often like to joke that not only are we living in a simulation, but a poorly run one at that. Hasn’t been updated in years, management isn’t hiring competent staff, bills are overdue, etc, etc. At the very least, it not only explains why our world is such a mess but shifts the blame to our imaginary simulation overlords. I think I speak for everyone when I say… fuck those guys.

But sometimes, every so often, there’s a moment where the simulation clicks, where it gets it right. Just look at the Josh Fight that happened over the weekend. Not only did a bunch of random Joshes meet in a Nebraskan cornfield to wail on each other with pool noodles in an effort to bring a pointless meme to life, but they did so for a good cause, as the Josh Fight raised more than $8,000 for a non-profit fundraiser on behalf of the Children’s Hospital & Medical Center Foundation to help them provide medical care to kids in Nebraska. This — this right here — is a prime example of our simulation firing on all cylinders, wherein the absurdity of our existence is used for good.

This trailer for Ape vs. Monster, a wildly blatant ripoff of Godzilla vs. Kong, is another example of The Simulation just gettin’ it right.

And it’s real! Made by The Asylum (the studio behind the Sharknado franchise (remember those?!), Ape vs. Monster is set to be released later this year. Here’s the official synopsis for the film in case the trailer didn’t make the plot clear enough:

An ape crash-lands on Earth, which creates a sludge that makes him and a passing scorpion grow to giant-size, resulting in a fight for dominance.

At this time, while Ape vs. Monster has no release date, it’s currently set to drop sometime this year. As for Godzilla vs. Kong, that remains available to stream on HBO Max until the end of the month.