On The 50th Anniversary Of The Apollo 11 Mission, Let’s Look Back At Buzz Aldrin Socking A Moon-Landing Denier 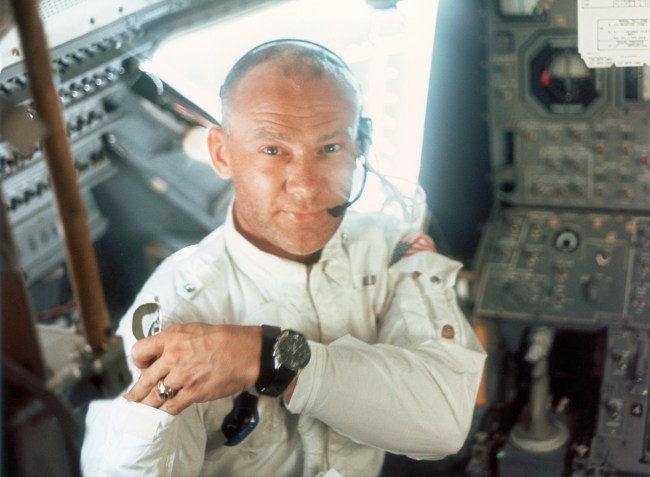 On Tuesday, July 16, 1969, at 9:32 AM, the Apollo 11 blasted off from the Kennedy Space Center on Merritt Island, Florida. A 363-foot-tall Saturn V three-stage liquid-propellant rocket would shoot the Lunar Module (LM-5) and Command Service Module (CSM-107) into space along with the Apollo 11 crew: Neil A. Armstrong, Michael Collins and Edwin “Buzz” Aldrin.

Mission commander Neil Armstrong and lunar module pilot Buzz Aldrin would become the first two humans to land on the moon at 4:17 PM on July 20, 1969. This 238,000-mile journey to the moon is celebrated by the space and science communities as one of the crowning achievements by NASA and by all of humanity. Armstrong said the miraculous journey was “one small step for man, one giant leap for mankind.”

The moon landing not only captivated the hearts and minds of Americans, but the entire planet. However, many people questioned the entire Apollo 11 mission a few years later. There were conspiracy theorists who believed that the U.S. government faked the moon landing and it was an elaborate hoax to fool the country and other countries, especially the Soviet Union.

Skeptics claim that the U.S. government used Hollywood studios and even enlisting legendary director Stanley Kubrick to fake the moon landing. Many moon-landing deniers argue that there are too many inconsistencies with the photographs taken on the moon and the quality is too high.

Some of the conspiracy theories claiming that the Apollo moon landings were fake have been disproven.

One well-known moon-landing denier is Bart Sibrel, a conspiracy theorist who believes that the Apollo moon landings were staged by NASA with help from the CIA. Sibrel, who is a controversial filmmaker, made four documentaries regarding his conspiracy theory that the moon landing never happened and a government hoax including A Funny Thing Happened on the Way to the Moon in 2001 and Conspiracy Theory: Did We Land on the Moon? also in 2001.

Sibrel is also known for stalking and ambushing Apollo astronauts, then demanding that they put their hand on the Bible and swear on oath that they walked on the moon all while he films them.

On September 9, 2002, Sibrel gained access to Aldrin in a Beverly Hills hotel room by telling him there was an interview for a Japanese television show for children. The moon-landing denier showed Aldrin one of Sibrel’s conspiracy theory documentaries Astronauts Gone Wild. “Well, you’re talking to the wrong guy,” Buzz told Bart about his theory. “Why don’t you talk to the administrator at NASA? We were passengers, we’re guys going on a flight.”

After the unproductive interview, Sibrel continued to badger Buzz outside the hotel. Sibrel not only confronted Buzz, but also got in his face numerous times demanding that he swear that the moon landing never happened and he never made his famous lunar walk.

Sibrel continued to hound Buzz and told the Apollo astronaut: “You’re the one who said you walked on the moon when you didn’t.” Aldrin told Sibrel: “Will you get away from me?”

RELATED: Mysterious Massive Anomaly 5 Times Bigger Than Hawaii Discovered On The Moon And Scientists Don’t Know What It Is

Sibrel continued to harass Aldrin and called Buzz “a coward, and a liar, and a thief.” That’s when Buzz Aldrin had enough. The Apollo astronaut socked the moon-landing denier right in the face with a solid right punch. The interview was definitely over after Buzz tried to make Sibrel see stars. The confrontation and the punch were all captured on video.

Sibrel presented the video to authorities and brought assault charges against Buzz Aldrin. But the court ruled that the conspiracy theorist had provoked the fight and no charges were filed against Aldrin. Sibrel would later write a letter of apology to Aldrin for instigating the fight and calling him names. When you’re one of the handful of people to have walked on the moon, you get a free pass to punch a guy who gets in your face and calls you a coward.