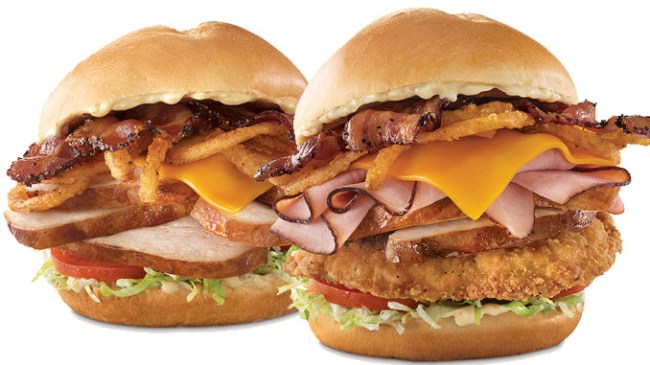 Are you bursting at the seams with turkey? Have you finished eating all of the turkey salad sandwiches you can muster and are so sick of Thanksgiving food that you don’t want to even see it for an entire year? Well, maybe its time to get back to the other poultry that dominates the food landscape, I’m of course talking about chicken. But why just have chicken when you can have beer-marinated chicken?

Arby’s The Beer Can Chicken Sandwich comes with Miller High Life beer-marinated smoked chicken, melted cheddar cheese, crispy onions, pepper bacon, lettuce, tomato, and garlic aioli on a toasted specialty roll. The fast-food purveyor will also offer a Tall Boy Sandwich that offers all of the same ingredients plus doubles down on the meats by adding pit-smoked ham and a crispy chicken fillet. The beer can chicken sandwich reportedly sells for $5.49* by itself or for $7.49 for the combo meal.

As delectable as all that sounds, you probably can’t get either limited-time only beer can sandwiches. That is because Arby’s is currently only testing these two delicious-sounding sandwiches in Minneapolis, Minnesota; Augusta, Georgia; and Tulsa, Oklahoma. These three cities only have until December 23rd to buy all the beer can chicken sandwiches to convince Arby’s to roll out these hefty beer-infused delights out nationwide.

*Can of beer not included. Unfortunately.

Arby's is testing a beer can sandwich in Roseville, Minnesota. The chicken is marinated in Miller High Life Beer prior to cooking, and is topped with garlic aioli, cheddar cheese, pepper bacon, crispy onion rings, lettuce and tomato. The sandwich is selling for $5.49. pic.twitter.com/Y4XLFdrNHp

RELATED: This Is The Best Beer Can Chicken Recipe On The Internet And Shockingly It Doesn’t Include Beer From A Can