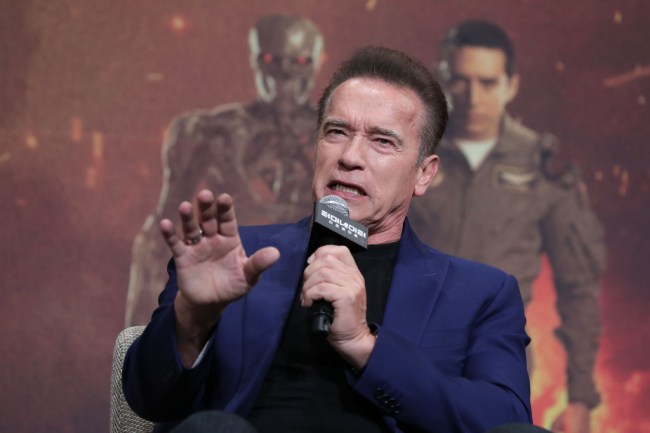 The key is being able to get back up and rebound from those moments of collision.

What happens when you have a setback in life? When your state of “normal”  gets kicked off its axis?

“One setback I’ve had – When I had heart surgery. I go in 22 years ago, I had open-heart surgery. I got two new valves – aortic valve and pulmonary valve. They told me that in the next 15 years, they’d to change them out again because they were human valves.

That ended up lasting 22 years.”

In April 2018, the former California governor was hospitalized after a complication during a planned medical procedure to replace his valve. His team of doctors had to perform emergency open heart surgery to keep him alive – his second open-heart surgery.

In the podcast, Schwarzenegger explains how the sixth Terminator movie – Terminator: Dark Fate – was one of the first things on his mind after he woke up. Famously, Schwarzenegger’s first words after the procedure were “I’ll be back.”

In the podcast, he explains how the upcoming movie shoot was a big motivation factor in his recovery:

So I go to sleep. Next thing you know, I wake up.

There were three doctors in front of me they said because they had to do open-heart surgery.

They told me ‘Something had went wrong with this non-invasive surgery and they punctured through your heart-wall, and you had internal bleeding. In order to not have you die on the operating table, we had to open you up.’

So I’m laying there and I get this news that I just had a second open-heart surgery.

The first thing that came to my mind was how in three and half months, I’m supposed to be in Budapest and they’re supposed to shoot Terminator Six.

Instead of six months to recuperate and to recover, Schwarzenegger was determined to be cleared by his doctors and ready to film Terminator: Dark Fate.

When something happens to me, it’s automatic for me to think of what’s next because I always look for motivation. Because if you have no motivation, it’s very hard to get going under those circumstances – you’re drugged up, you’re in pain, and you just faced a major, major setback.

I looked at the schedule and said, ‘OK, when can I get up?’ And the doctor said not for the next three or four days – ‘we would not recommend it because this was very severe. Remember you’re not the youngest guy in town anymore and blah blah blah.'”

The next day, Schwarzenegger started walking around the hospital with a walker to keep his lungs healthy and avoid pneumonia. Those walks got longer and longer.

Within six days I was out of the hospital, and from then on, I just worked on this and walked around the house, up the hills and everything. I went back to the gym about three weeks later, light exercise with light weights – no chest exercise, of course.

Incredibly, Schwarzenegger was able to keep to the production schedule, despite a major emergency surgery. He wants the same old Arnold for it, too:

Three and a half months later, I was on the set.

The director said “I can’t believe you had heart surgery just a few months ago.”

Arnold with a masterclass on how to deal with a setback. The man sure knows how to revound. All the while, he kept his head on his shoulders about the whole thing, with a sense of levelheadedness, humility, and perspective:

So we have setbacks. So if you have a very clear vision and a very clear goal, you can come back from these setbacks very quickly – the key thing is to not fall into this trap of feeling sorry for yourself. Because there’s enough people out there in the world suffering much more than I was in that hospital bed when I woke up.

Puts “I’ll be back” in a new perspective.

Watch the full podcast in the video below. The conversation on setbacks starts around the 18:00 mark.