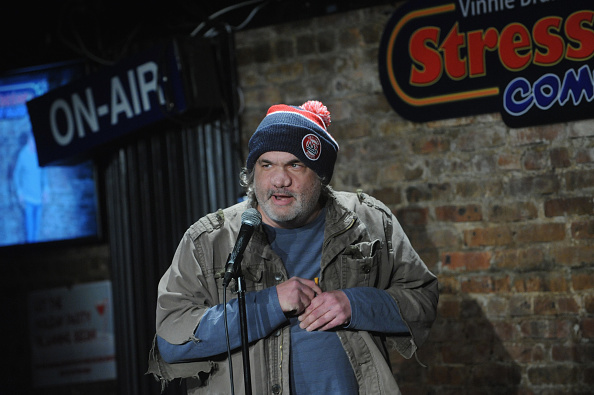 Artie Lange is not shy about admitting that he has an addiction to debilitating, but sadly whenever he seems to have gotten help or had sobriety for a few weeks he falls off the wagon. That’s not a knock on Artie, but eventually his harmful vices are going to catch up with him. Thankfully for Artie, he has a supportive group of fellow stand-up comedian friends who want him to get better before it’s too late.

Stand-up standout Richard Lewis urged Artie to get help and get sober. In a tweet this week Lewis told Lange: “Artie, this is my 1000th request over decades to beg you to surrender to your addictions. When you had time clean we had the most laughs sober. I love you. You’re beloved and a magnificent comedian cursed with self-loathing and fear. Give it up and live.”

⁦@artiequitter⁩
Artie, this is my 1000th request over decades to beg you to surrender to your addictions. When you had time clean we had the most laughs sober. I love you. You’re beloved and a magnificent comedian cursed with self-loathing and fear. Give it up and live.🙏 pic.twitter.com/KzOyvSLaW3

Lewis battled alcoholism for decades until he got himself sober on August 4, 1994, and even wrote a book titled The Other Great Depression, about his recovery from alcoholism.

The timing of Lewis pleading to Artie to save his own life may have something to do with the death of fellow Curb Your Enthusiasm star Bob Einstein last week.

Seriously @artiequitter, please, please listen to Richard. As a fellow comic, I really don’t want to have to tweet about how fucking funny you were and how sad it is you’re gone any time super soon. We all love you alive, man. https://t.co/NFhAD8uWBE

YES!! We love you @artiequitter xo

Jackie Martling, who was Lange’s predecessor on The Howard Stern Show, shared his sober success story of ditching booze and drugs for 18 years this May and told Artie that he was “100% in your very crowded corner.”

coming up to 18 years in May. in early 2001 I’d have laughed at the idea of not drinking for 18 *days.* Art, I know you know the laughs are just as hearty on this side. I love you and am of course 100% in your very crowded corner.

RELATED: What The Hell Happened To Artie Lange’s Nose!?!?!

At Superior Court in Newark in December, Artie tested positive for multiple drugs including cocaine, amphetamine, benzodiazepines, and Suboxone (a drug used to treat opioid addiction). Lange, who is only 51-years-old, told the judge that “heroin is out of my life” and he “wouldn’t be arrogant enough to come in here after using cocaine for two days.” Artie is currently serving four years of probation after pleading guilty to heroin possession, but the judge sparred Lange any jail time for now, but was told to get sober or face jail time.

Artie hasn’t replied to the pleas for his to get sober, but instead he does what Baby Gorilla does — tell jokes. Artie, listen to your comedian friends, get serious about your health and get help.

I pray that a smoking hot 22 year old girl who’s totally blind and who doesn’t have that ability Ray Charles had of knowing a persons fat by feeling their arms needsmy help one day in the lobby of a rest stop motel pic.twitter.com/5kKgSyGQyD

I pray Nick & Drew will stop arguing over little things and give the world a 98 Degrees reunion tour pic.twitter.com/tf5LFTUUpO

I hope all 7 girlfriends (I counted in my head. 7) who in the week before they left me said this verbatim ““Artie My mom always dreamed I’d marry a man w a working septum” see this pic & cry from guilt. Why? Never telling me I hid heroin in my Giants wool hat during a blackout pic.twitter.com/HXR2I8NIyJ

RELATED: Artie Lange Shares New Photo Of His Deformed Nose And Tells Story Of How He Accidentally Snorted Glass